Part 2 of Another Day on Call in the Arctic

Next in line to see the nurse on call...Pommer, the Pomeranian. 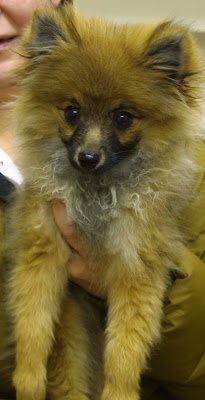 We finally breathed a collective sigh of relief as the unstable cardiac patient was loaded onto the medevac plane.

We got the call that there was a lady with a dog who had a broken leg. Apparently she had called the RCMP first but they directed her to the health center. I was on-call so agreed to see the pooch. We're not really supposed to treat animals but as the nearest vet is 4h away by plane we usually bend the rules and help out if we can.

Pommer was a rust colored fur-ball of a puppy. An adorable 4 month old who had apparently been 'dropped' by the chubby, flat affected, 8 year old---er---since when did dogs break their legs from being dropped 3 feet above the ground?

Anyway, the dog seemed settled enough in the mothers arms but with even the slightest movement the yelps of pain elicited were so ear and heart piercing that we could hardly bear it. Our attempts at x-ray had been traumatizing for everyone involved. Thus the decision was made to try and medicate and splint the poor creature.

So I called Dr. P in Whitehorse, a vet who gives over-the-phone advice and he talked me through how to create a muzzle out of kling gauze (so as to not get bitten) and how to landmark for an intramuscular injection of demerol. And so the splint was made with the bendable metal we fashion finger splints, gauze, and kling. We had to get creative with the narcotic sign out sheet that day...Did you know that dogs have radius' and ulnas? I had to laugh at the learning curve of the evening. It perfectly depicted life in the North. One minute you're giving I.V amiodarone to an unstable cardiac patient and the next you're making leg splints for a puppy.

All in a day's work.

P.S Doctor D has graciously nominated me for a med-student blogger award! Head on over and cast your vote in my favor of course.
Posted by Albinoblackbear at 08:07

There is no shame in campaigning. There's a Supratentorial Mug on the line here.

As I speak, you are in the lead. Congrats!

That was a cool story. Vote for Old MD Girl!!!