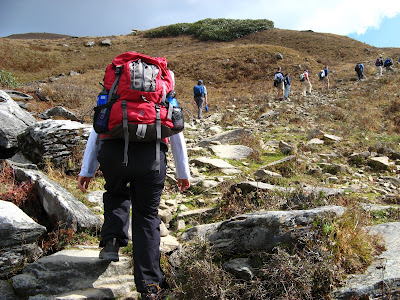 Today we rolled off of our therma-rests early and began the hike up to Chansal Pass. It was a steady and moderate climb.

At the top Cathy and James attempted the 'jump shot'. After about 17 takes this one worked. 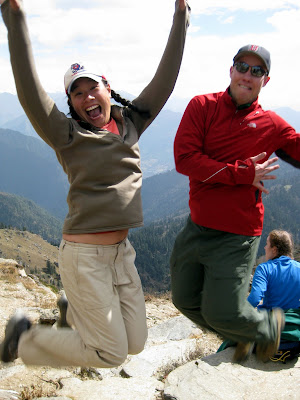 As Sheele pointed out after starting his international emergency medicine fellowship, "it's mostly women that want to save the world". So true. So true.

The gang...can't you just smell the polypro?? 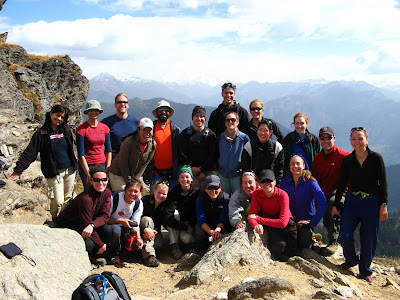 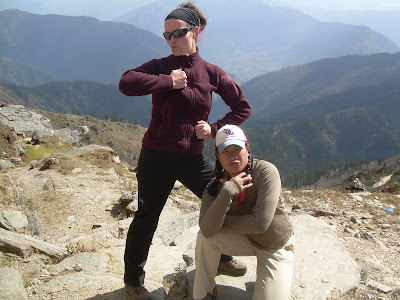 I am never sure if it is all in my head regarding the altitude and how I am feeling. We've been taking it easy and acclimatizing slowly but I still feel like my chest is tight and a bit more short of breath than I'd expect. I am a wuss.

I've been taking diamox and am loving the fact that I am on a diuretic whilst hiking with a group of 20+ people, in the alpine, where finding a little rock pile to pee behind can be a challenge.
The diamox also makes you sun sensitive. I forgot about this as well and did not put enough SPF along my hairline. Thus (as you can see the sun shining off my forehead) I got a bit of a burn today. I can't wait until my hairline starts peeling. Hot. That is going to look hot. 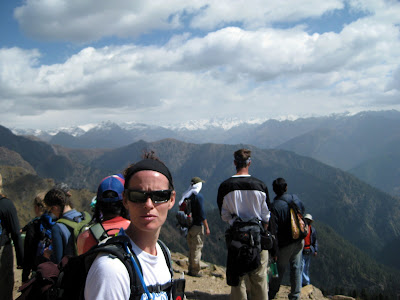 The transient extremity parasthesias have been another interesting side effect. I am glad that Sheele told me about this possibility or I am sure I would have thought I was getting MS or something on the trip...

Two of the members of the team are down with what appears to be altitude sickness, two others are in the gut-clutching-running-to-the-poo-tent realm. The upside to that is at least there are spectacular views from the poo tents. 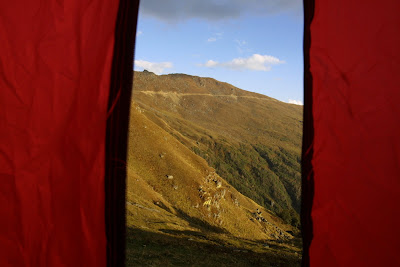 I am feeling tired and dirty. We're only on day 4 of camping which means there are still a couple of weeks of tenting left. This is going to be interesting. 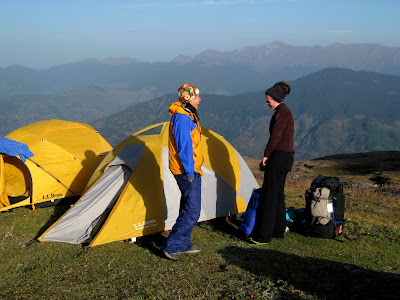 My fingernails are disgusting. I am using wipes at night to give myself some semblance of cleanliness.
I think I will have a nap now. My heels are tingling. 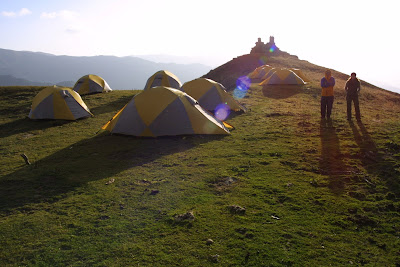 So I have this super deluxe therma-rest which has a thin layer of down in it, and inflates to about 3 inches thick. It gives me, by far, the most comfortable sleep I have ever had in a tent. The mat is inflated by using the bag which it comes in. You close the bag (with air inside) then hook up the mat to the bag, squeeze the bag of air into the mat and it inflates. This process usually takes about 7-10 bags of air to inflate the mat to my desired thickness (wuss thickness). You can't blow in the mat to inflate it or the moisture from your lungs will rot the down in the bag. All along this has been fine and dandy, until today. Apparently when you are camping at 14 000 ft the air is a little thinner. Thin air=80-100 bags of air to inflate my little air matress by 3 inches. By the time I had it almost inflated for my nap I was ready to shred the contraption. Eventually I just blew a few lungfulls of air into it. Mouldy down be DAMMED! 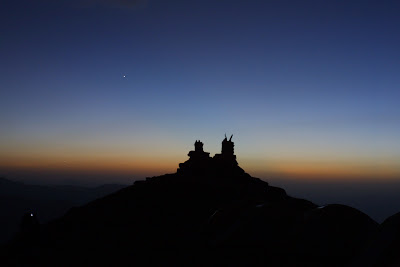 Posted by Albinoblackbear at 13:49 2 comments:

I actually felt clean for a brief, flickering moment today. On my early morning walk found a stream from a field that had runoff into the nearby ditch. The field and ditch were separated by a height of about 3 feet. I headed back to camp and grabbed my camp wash. Took off and tied my long sleeved shirt under my armpits in an attempt at modesty. Washed my hair and face under the ice cold water, trying not to get my hair caught in the chicken wire that held stacks of rock back from topping onto the road. Clean hair=good no matter what the process. 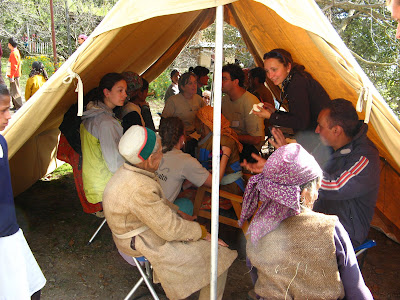 Today was the second (and last) day of our first clinic site near Shimla. I was in the PEDS tent with Rachel, one of the pediatricians. It was mostly non acute presentations: nosebleeds, coughs, diarrhea, tummy aches... One very stoic boy who was about 11 years old came in with partial thickness burns to his hand and forearm. The burn was about a week old and not healing well, infected and beginning to abscess. Rachel drained it and the lad barely uttered a peep. The way that children handle pain and crisis never ceases to astound me. So many of them are such warriors it seems. 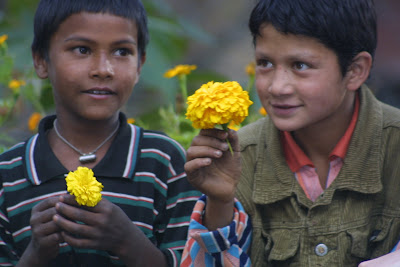 Did see a few interesting things, some shingles, some scabies...scratch...scratch...and THE craziest, boggiest, macerated ear drum...ouch! Thought that my time on Baffin Island had already shown me the worst of the worst in that department. "Baffin Ear" and "Baffin Lung" are euphemisms known by the health professions in the North to describe "nasty-draining-foul-pus-OE/OM-from-hell" and "RSV-happy-wheezer-whose-sats-are-80%".

It was a madhouse in the afternoon because most of our interpreters/drivers/donkey handlers/cooks all vanished to transport supplies and gear to Shimla. The medicine tent had one interpreter sitting in the middle of a 'translating circle' dealing with 5-6 patients and health professionals at once. At one point, Caroline was just taking random blood pressures on people outside. 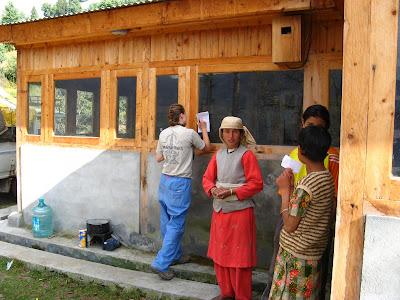 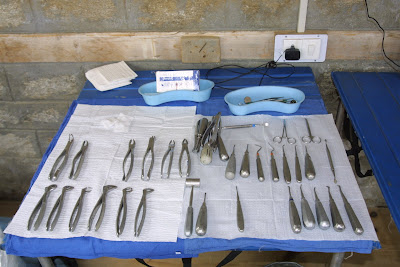 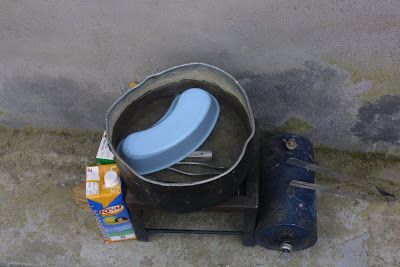 All told we saw about 200-250 patients today. Can't help but wonder though...how much of a difference are we really making in the long term? Sigh.
Posted by Albinoblackbear at 13:36 3 comments:

This was the first clinic day...

I awoke to the sound of rustling outside the tent. Zipped it open to find a medium sized calf grazing under my laundry line of unmentionables. 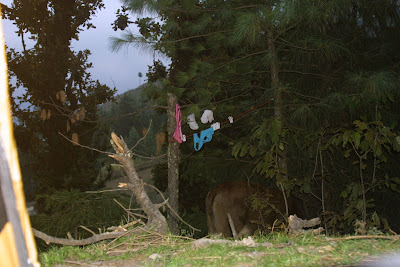 You bond rather quickly in a group of people when only tent walls separate you, your toilets are holes dug in the ground, no one has access to a shower, and your underwear hangs from a line. You just can't put on airs or try and out-class someone in these situations.

We had a team meeting where everyone was assigned their posts for the morning.

And a stray dog slept... 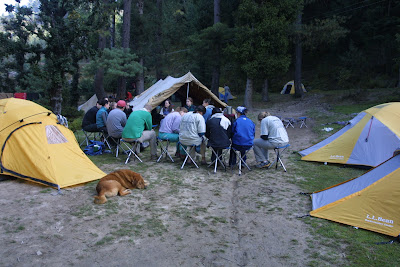 There was a certain air of excitement as we marched down the path to the clinic site that first day. Everyone was still pretty shiny and new. Our scrubs still had that 'new hospital smell' to them. 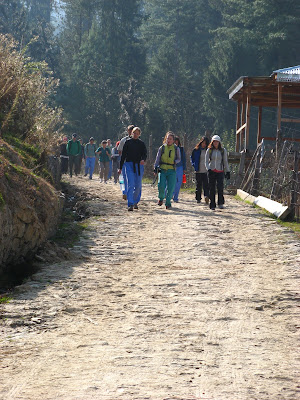 It was a bit slow to start. Our "Himalayan Health" banner hung proudly, the tents were assembled, and we steeled ourselves for the crush of patients that were sure to arrive. 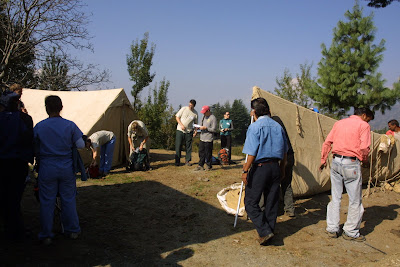 But 0900h came and went without anyone at registration.

We re-checked the lights in our scopes, stacked up our tongue depressors, clicked our pens.

Finally, after 1000h, our first patient arrived and Betsy and I pounced on him, happy to finally get things going.

Then the dam broke.

Dozens of people arrived. After registering with a couple of our translators they began hovering around the entrance to our tiny triage tent. Pushing into the tent, people leaned on each other...peered in, listened in. 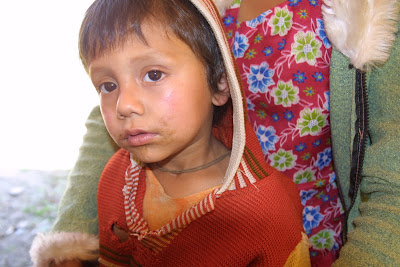 There was no privacy as we asked, through our interpreters, questions like "when was your last period?" and "does it hurt when you pee?" We were assessing people and directing them to either the gyne tent, the med/surg tent, the peds tent or the ER procedures tent. 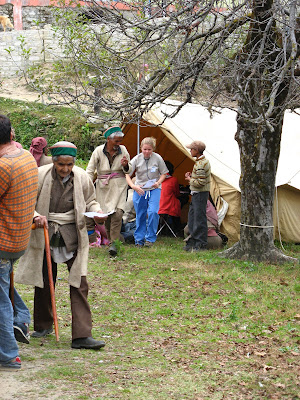 Things were always busy in the medicine tent. Always busy. 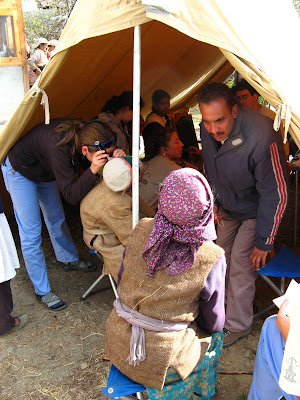 After being seen, patients were sent to the pharmacy to pick up multivitamins, albendazole if they were 18 or younger, and whatever else we could give them to treat their ills. 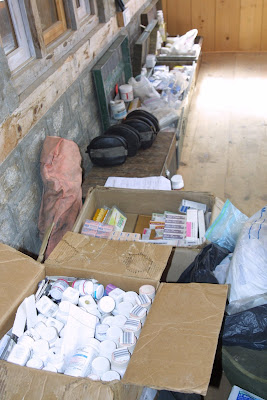 The pharmacy was inside a government house which we were allowed to use for the clinic. 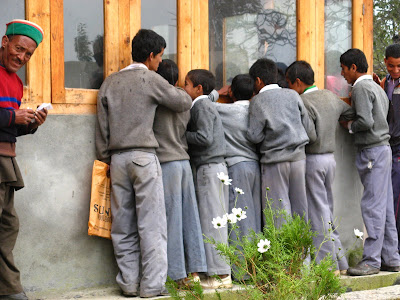 It certainly provided its own crowd of onlookers. 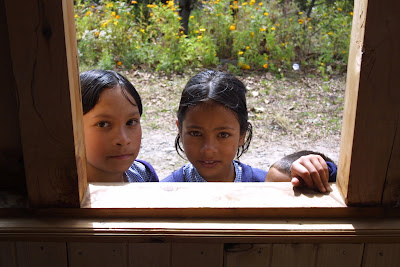 The first of many adjustments I'd learn to make on this trip was the art of triaging. My background in ER has at times given me the job of triage nurse in major tertiary centers. In that role you have to really have your game face on at all times. Not only do you have to keep track of all the fading flowers in the waiting room, but who is in line, and what is coming in through the ambulance bay. You have to be able to run a quick focused assessment on patients, gather vital signs, take a reasonable history, and stack them in your mind. Do they fall into the "can wait until the next general election" category or do they fall into the "quickened footsteps to the trauma bay while trying to look nonchalant" category? And then how do they rank within those categories....and how are those folks in the waiting room doing, and who is the guy yelling at me about his dad? How am I supposed to know who his dad is anyway?? But I digress...

I quickly realized that triage on this trip was going to be quite different. First I would be deciphering the chief complaint which was written down by the men at the registration table, frequent complaints being "chest pain", "body lumps", and "back pain".

The next step was pronouncing the name to a large mass of people, this feat often met with peals of laughter, the crowd mimicking said pronunciation, then someone being prodded up to the front of the line. After the comedy act of me calling the patient I would be expected to take their temperature, BP, weight (in children), and assertain which tent they belonged in. Then I would walk them to this destination. Rinse. Repeat.

Initially I had been doing what I was used to in Canada, but it soon became apparent that we had to 'move the product' much faster here. I felt like the most useless triage nurse in the history of the world. A quick glance and off they went. Did we even need a triage tent? I had to re-adjust my 'sick look' radar as many people looked sick. Malnutrition and poverty apparent in the children, hard physical labor showing its toll on their parents.

All in all, we saw 75 patients today. Tomorrow we run a second clinic here and the numbers are expected to be much higher.

I have noticed that I felt a bit short of breath today. We are only at 7000ft but in two days will be climbing to over 14 000ft. Tonight I will start diamox. I am sure the SOB is mostly in my head, but I can't help but remember huffing at 12 000ft last year in Switzerland. So I will take it just to be on the safe side. The last thing I want is to be sucking wind at the end of the line because of altitude sickness. I didn't get those blood stained runners this summer to look like a chain smoker at elevation!
Posted by Albinoblackbear at 21:51 1 comment: