Another Day On Call in the Arctic 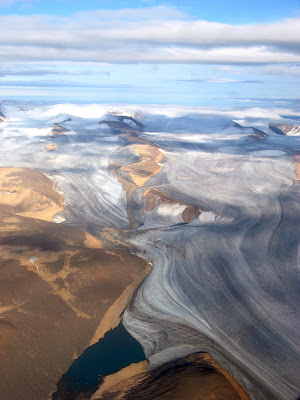 I miss working. I can't believe I just wrote that. It's true though. Feeling nostalgic today I was reading through my journal from a few years ago when I was working in a remote Inuit community in the Western Arctic. It makes me antsy to get back into the trenches. And so, another installment from Ohtanninbound (my original blog)...

I actually helped save a man's life today.
Cut my finger trying to eat a muffin.
And watched some bad Canadian television.

It was so interesting to see the events of the day unfold in a dream-like sequence...I felt like I was watching it all from behind glass, yet so in it I could barely raise my head above the smell of benzoin. The benzoin was being used as a tacky assistant, since the EKG stickers were sliding off the patient as fast as we toweled him and applied them. The cold sweat seemed to travel down his body like a clear oil slick, removing all our feeble attempts at securing I.V's and electrodes to get a heart tracing. The benzoin's sap-like consistency anchored our only diagnostic tool.

A garbage bag curtain hid the unfolding ice storm as inside we swirled around our most diaphoretic, nauseated, hypotensive, peripherally shut down patient.

I had been assessing a young man's knee when Jane burst into my office. She can get a bit dramatic near the end of her stints so I wasn't fazed at first. "Uhh...I think I've got an M.I in my office." M.I is medspeak for myocardial infarction, a.k.a 'heart attack', a.k.a 'a jammer'. I asked my patient to hold tight. I love cardiac stuff. It's a throwback to my old ER stomping ground that was in the heart (pun intended) of the silver tsunami which is the West Coast. Cardiac emergencies are interesting, challenging, emergent. Emergent is a nice change from the doldrums of most ER care which revolves around abdominal pain, back pain, flus, colds, headaches, lacerations, psyche, and the odd trauma.

I happily left the twisted knee and went into the trauma room. There, slumped on the stretcher was a very distressed Inuit man. He was clutching the center of his chest with one arm and failing around, grasping at air with the other. He was moaning loudly and the sweat was literally flying off him. His tan skin had somehow managed to take on a ghastly gray/green tinge and I could immediately see that we were in for the long haul with this chap.

No cardiac monitors, defibrillators, no I.V pumps. I was used to these constraints in settlements but cardiac problems are so rare that normally I don't notice it. I wheeled the EKG machine to the bedside as our only means of 'cardiac monitoring' . He was in v-tach. This was glaringly obvious the second I fired on the EKG with help from Jane, who was starting I.V's and trying desperately to have the leads stick to his chest which was as slippery as the frozen ground outside.

A heart beating 240 times a minute is more like a fluttering wing than a pumping muscle. When this happens oxygenated blood does not get to the right places. Where the blood is not perfusing the starved cells begin to die. One place that doesn't get the supply it needs is the heart in these situations. And in these cases, minutes mean muscle.

It was bad. Maybe a pressure palpable at around 65 systolic. I was scared and excited and intrigued all at the same time. I was loving it.

He was gulping for air despite the 10L NRB mask on and the nasal prongs at 4L. Gulping! And we couldn't get an o2 sat because his fingertips were giving up no information. The sat monitor could not read how much oxygen his red blood cells were carrying around...his capillary blood had packed up and moved north.

More north than we were.

I called the doctor at the hospital which was an hour away by plane (the only way in and out of the community). As usual the security guard/answering service put me on hold for a horrifyingly long time. By this time Lawrence, our only other nurse, had taken over the duty of watching the EKG machines 2x2 inch screen for any changes while Jane worked continuously to dry off and re-tape the electrodes as they slipped off.

I hung up the phone and called the emergency line again, this time telling the security guard that I needed the MD on call toute suite. A harried doc came on the line and I apologized for raising the alarm but told him he needed to initiate a medevac for an extremely unstable cardiac patient and I needed some orders for the impending code that was going to happen. He asked me to fax the EKG and get amiodarone into the patient as soon as possible, well, as soon as he got the EKG and could confirm my v-tach diagnosis. To take care about the administration and set the pump to make sure he got the right dose. Pump! I laughed. "No pumps around here bud, I'll be giving that drug in a syringe drop by drop over 10 minutes once the loading dose is in!"


Our secretary was with the patients wife in the coffee room, trying to keep her calm so I was fiddling around with the ridiculous fax machine while trying to draw up the amiodarone and double check the dosing at the same time. Jane and Lawrence had their hands full still trying to get a basic set of vitals on the guy. Finally the janitor walked by and I managed to snag him into sorting out the fax.

In a few long minutes the doc called back and told me he'd initiated the medevac and had received the EKG. I thanked him and hung up the phone.

The loading dose of the drug went in and I shook my head at the set up we were dealing with. An impending blizzard outside, no way to properly monitor the patient, and no way to deal with him if he coded. I felt like my hands had been tied behind my back while the crisis crescendoed.

I held the 60cc syringe in my hand while watching the clock (the only real technology in the room) and dribbled in the maintenance dose.

Then lo he suddenly said--'the pain is gone'. He let go of his chest and turned his head to me in surprise.

The dregs of the amiodarone were still going in by my hand. I ran to the other side of the stretcher and happily informed him, indeed the pain was gone because he was in a sinus rhythm. I must have thought, thank God or someone.

I know that then I must have exhaled completely for the first time since seeing him floating in his own juices on that emerg stretcher from the 1950's.

The time had warped. Despite the freezing rain and the blowing snow, the fog and the ceiling the plane landed and he was scooped (infuriatingly slowly!!!) by the paramedic and med student.

And off they flew, 6h after he'd driven himself to us.

Suddenly realizing that it had been too long since I'd had a chance to pee, eat, or drink water, I endeavored to change that. In the process of trying to quickly saw in half one of my 4 day old muffins the chopping knife slipped and gashed my left index finger.

That was annoying. It started bleeding and bleeding, I thought--there is no way i am getting sutures today...so I applied pressure, steristrips and a bandage. And was still annoyed. And will continue to be as the deep cut on my right index finger from climbing has only been freed from bandaids for 24h. Ugh. Oh well, I realize how pathetic a cut finger is compared to a jelly heart.

But I thank him and bless him. He gave us a rare satisfaction. The feeling that we actually did something really important that day. We worked as a team and even with our limited resources we actually saved a life. We didn't just look in throats and ears and give out septra for U.T.I's all day.

It also made me thankful that I had spent those hellish nights in the viper pit in my old emerg department. That's what all those countless cardiac cases were preparing me for.

I do hope he does well, was such a nice, funny, man. He joked with me about wanting to eat berries and that he was getting ready to 'run out' and pick some before the medivac crew arrived.

The wind is rattling my windows still and the power just went out. Thankfully he got out before the storm really hit.

More importantly, what happened to the guy with the knee?

Awesome. I'm spoiled by my Level 1 trauma center with all the fancy drugs 'n pumps 'n trauma bays we've got. Must be a rush to practice in the trenches :)

Matt--Good question! He's probably still sitting in my old office there waiting for a tensor and sick note for work...

There is a reason MSF equates Arctic work to 3rd world country experience! :)

Wow! That post was amazing. I feel completely useless without a whole bunch of monitors and drugs at my disposal. Another reason I think I need a whole lot more experience before doing outpost nursing (something I've been considering for a while). Looking forward to more Arctic stories.