My hand was shoved down, awkwardly positioned between the folds of trousers and half-pulled down underwear, in the man's groin crease, trying to palpate his testicles without pulling any of his pubic hair. Something didn't feel right, but it wasn't his testicles.

I was in my final surgical OSCE's and it was my first station, where the adrenalin was flowing and my mind was racing faster than my running commentary...

...and I would be checking to see if there were any hard lumps in the scrotum, or if I could not get above the swelling...

I had only just recovered from initially describing my landmarking for the deep inguinal ring as the "midpoint between the pubic trochanter and the anterior superior iliac spine" which caused my examiner to hover his pencil over the marking pad as I searched for the correct word that started with a "T".

Initially I hadn't been too flustered. It was a groin exam for a lump, which is pretty standard on a surgical final. But I didn't think that we'd be expected to actually tackle the tackle in the exam. I said the usual "Ideally I would like to expose the patient fully and perform a genital exam to complete my hernia assessment" and waited the beat for the examiner to butt in, rescuing the patient from a succession of 32 fumbling medical students.

Maybe he hadn't heard me.

Ideally I would like to EXPOSE the patient fully and perform a genital exam...

Still nothing. So I went for it. Which is how I found myself rolling this 70 year old man's testicles around in my hand at 0905h on my last day of medical school, wondering WHAT it was that didn't seem right.

It wasn't until my rest station a few stops later that I saw, between a one inch crack in the curtain, a colleague pulling on a pair of gloves.

That was what felt weird. I have been a nurse for 5 years and a medical student for 4. I put on gloves when I hear the ambulance bay doors open, even before I see the patient. So WHAT THE HELL WAS I THINKING DOING THE EXAM BARE HANDED?!?!? What felt weird was the fact that I didn't have a nice latex barrier between myself and that poor man's private parts.

I started wondering if maybe my mistake had been a red flag (i.e. cause for failure of my surgical OSCE's as a whole). When one of the emerg docs walked by and asked how I was doing during a later rest station I told her, "Well, pretty good for starting the day by ball handling without gloves, how's your day going? Do you think I red flagged???"

She said she couldn't be sure but told me not to worry as once during her emergency medicine exams she put in a chest tube without gloves (I'll point out that this involves sticking a FINGER INTO THE CHEST after you've made an incision in the rib cage). She did make me feel better.

Afterwards with some of my classmates during our postmortem on the exam I confessed to my ridiculous oversight. The color drained from one girl's face as she suddenly realized that she had done the same. Ohmygodohmygodohmygod. She seemed to be quite disturbed by this realization. It wasn't until much later in the evening when she had consumed a few celebratory pints that she approached me at the bar and confessed.

You know how freaked I got about not wearing gloves? Well...I couldn't tell you at the time because I was so mortified....but mostly the reason I was so upset was that when you said that I realised that right after that station I had EATEN A SCONE!!!!!

Posted by Albinoblackbear at 12:06 9 comments:

It was a rush. It was not anticlimactic at all.

I had been warning myself not to build up in my mind the last moments of medical school and the thrill of being done. So many milestones have felt disappointingly bland once they were reached.

Well it turns out that finishing medical school is not one of those milestones.

After a week from absolute hell (which I will get into once my medical degree is firmly planted in my hand) I arrived on Thursday morning for the last set of OSCE's (clinical exams). It was 12 five minute stations of medical or surgical skills. My last station was giving discharge instructions to a patient and when the buzzer rang, the actor patient stood up and shook my hand to say, "Well done!! You're done!!" The examiner said "Congrats!" and I emerged from the cubicle to see my friend, JM standing there with a huge grin on his face.

JM was the very first person I met in our class. We met in Toronto while taking the elevator up to our interviews. He surmised that I was there for the same reason and asked me where I was from, what I did for a living etc. When I told him I was living in Whistler, working in the emergency department there he stopped me and said, "Wait, so you live in Whistler, you have a job you love, yet you're planning on giving it all up to move to a different country and become hundreds of thousands of dollars in debt to be a doctor? Why?"

Well, when you put it that way. I had thought about his comment many, many times during the last 4 years. Why, indeed.

So when I saw his face as I stepped out of my last station I had to chuckle at the perfect end to medical school. We gave each other a rib-crushing hug and he said in my ear, "You know why this is a perfect finish don't you?"

I laughed and cried a little and said "YES! You were the first person I met on this journey!"

Then I randomly hugged a few other bewildered, exhausted, adrenaline frazzled classmates...I may have pounced on a few invigilator bystanders as well. It is all a bit of a blur.

We were then put in a 'holding tank' room in the hotel for over an hour as the other groups of students hadn't gone in for their exams yet. We weren't allowed to use our phones so as not to text anyone what cases were in the OSCE. I came prepared though. One little bottle of Champagne in my handbag which was quietly popped and then poured into the coffee cups they had provided for tea. A "CHEERS!" and few gulps to my pals that were also in the group. Shortly after the Prof of Medicine arrived and was asking us how it went. We were gathered in little groups chatting away, so when he approached we had just finished our Champagne. He said, "Are you having drinks soon?"

"Er.....well yes! In fact we've already had a little Champagne!"

You could see him mulling over this fact...hmmm are they allowed to have alcohol? This is an exam...hmmm...it's only 1030h...

Then he said, "Of COURSE you've already had Champagne! You're DONE! Good thinking on packing some in advance!!"

We were set free.

I went and had an Indian head massage (best idea ever) at the spa, and spent the afternoon in the steam rooms and saunas with my dear friend, Emma.

The evening contained all the predictable events. Champagne. Great dinner out. Drinks at pub. Eventually going to Nancy's (the bar I LOVE to HATE). Having a drunk Irishman spill an entire pint of Guinness on me. Heading home with soaking wet jeans and a blister from my high heels. 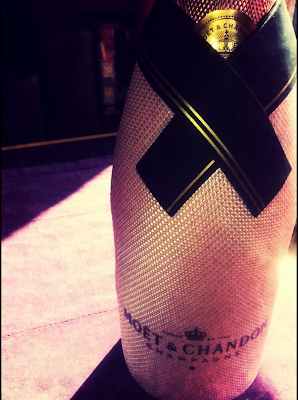 And then it was over.

But I know it isn't the end. As a friend of mine on FB said, it isn't even the beginning of the end!
Posted by Albinoblackbear at 11:01 5 comments: