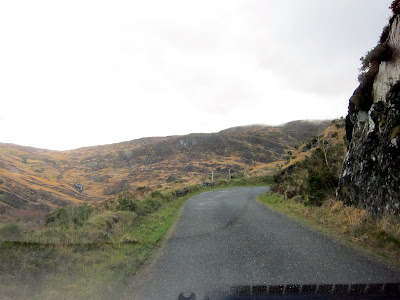 A few weeks back I convinced my brotha-from-anotha-motha, Ryan, to run this 10 mile race. So he signed up.

I balked. He trash-talked. I registered. I regretted.

It was actually pretty fun.

The drive there was an adventure, at one point the GPS (who I've named Dunce Cap or D.C for short) even got lost, telling us to turn left but mapping us to the right and then getting all hissy when I went left. I really want to throw that thing in the majestic river Shannon most days.  Though the road (pictured above) was scary and narrow, the directions were typically Irish ('after a long bend in the road take a left and follow that road') we somehow found the place. I had a moment of anxiety the night before when I realised that doing a race in the middle of February is actually a really bad idea. You see, it is too soon for there to be any resolutionists (as I like to call them). No one decides on Jan 1st to do a race 6 weeks later. Most would think it is not enough time to train for a medium distance run. And this race, in particular, is known as the 'most challenging 10 mile race in the country'. I'm not sure about this claim as it is possible that it is the only 10 mile race in the country. So, the folks running an ass-buster in Feb are likely going to be really in shape, doing it as a fun day out as they prepare for their next big race somewhere else.

Oh I so called it. As we pulled up we could see a blur of lyrca stretching and light-jogging up the first hill.  Formidable specimens, they were. I could see the outline of their vastus mediali  from the parking lot (which, by the way, was a farmers driveway, complete with fowl and swingsets, pictured above).
The weather was outstanding. It was indeed a challenging race with loads of hills. But both Ryan and I were happy with our times (Ryan had hoped to do it in 1:30 despite the elevation and he finished in 1:19)! I was hoping to finish under 2 hours since I haven't really been distance running since....oh....2008! But I managed to pull a 1:32 out which isn't exactly olympic qualifying time, but it got the job done. And I was pleased. And apparently haggard. 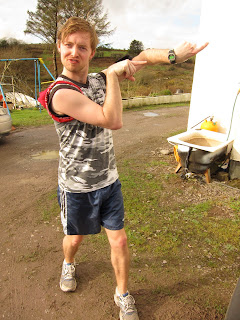 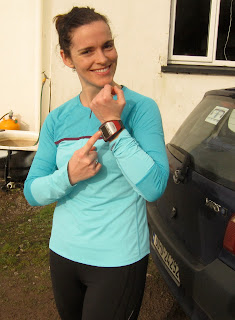 After the race I drove home, grabbed some food, water, bathing suit, and towel, and headed to the icy Atlantic nearby. My car thermometer read 7 degrees yet somehow I managed to strip off my many layers and plunge in. I am a firm believer in the ice bath. It had to be done and I figured a sunset dip in the ocean would be better than the view from my bathtub. 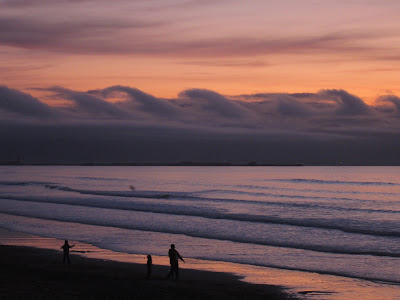 Turns out, I was right. Shortly after my dip the clouds rolled into this amazing formation that nearly took my mind off the fact that every cell in my body was shivering. I sat in my car, cranked the heat on (sorry environment, it had to be done for a few minutes) and ate my picnic supper. I made a mental note regarding what a lovely date I'd taken myself on, and deciding that yes indeed I would go out with myself again. Once the beach was dark I drove to the gym and vegged out in the sauna and decided that life was pretty much all I ever hoped it'd be. Oh Ireland, I really (heart) you sometimes.

The entire post leaves me speechless, but that last photo! You should hurry up and copyright it. I am not kidding. It is a prize winner.