The Irish are obsessed with high-visability reflective vests. I mean *obsessed* (at least in my neck of the woods). It is not uncommon to see people walking their dogs, running, DRIVING, with them on. Or, my personal favorite, having them fitted over the passenger/driver seats.

It seemed a little excessive to me though I am a fan of excessive personal protection use (i.e. after working in Whistler emerg I contemplated wearing a mouthguard/helmet to the grocery store).

Anyway, now that we have about 7 hours of daylight it is always dark when I run, whether I go in the morning or late afternoon/evening. I've been feeling a little, er...underexposed since I run in something akin to the "Invisible Pedestrian" costume from the old SNL skit with Dan Aykroyd.

So I've been on a quest to find arm warmers that are reflective. Impossible to get where I live (since evidently women don't exercise here unless it is in gold PUMA's). I thought about ordering some online but I hate buying things I've never tried before (not to mention the ones I found were black, thus furthering my ninja/running getup).

I ambled into the Universities book store yesterday to get some scribblers and saw a promo where if you buy a newspaper you get a free reflective armband (I said the Irish were obsessed with reflectors).  They were out of newspapers so I asked if I could just buy an armband. The woman told me to just take one. So I pushed my luck and asked if I coud have two.

I mentioned my invisible pedestrian running attire and she pulled out a big (classically Irish) reflective vest from behind the counter and said, "you need to get one of these!"

I (inwardly) chuckled and appraised the vest---and said it was great and that yes I should get one but that I figured I'd be too hot in it. She showed me how thin it was and suggested it'd be perfect for running. I agreed. She then goes, "ah sure now, just g'wan and take it!"  WHAT? 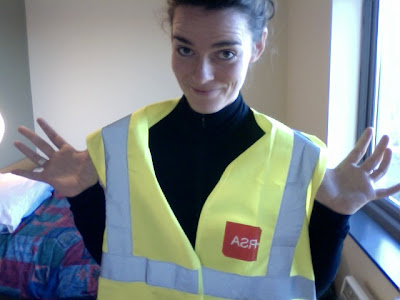 Yep. She gave me the vest! Hilarious! She said someone gave it to her last week and she didn't need it.


So now you will be able to both read my blog and see me from space! How awesome is that??
Though I am cautiously aware of their subtle assimilation tactics. Pretty soon I am going to switch to drinking tea in the morning and become obsessed with hurling.
Thanks random bookstore lady!
Posted by Albinoblackbear at 03:51

I wondered what that strange glow across the Irish Sea was!

You can even see a tinge of green in the light! That's some vest.

Hey, do the dogs that are being walked wear them, too?

AB--Yep. It's me out jogging (pronounced "yogging").

OMDG--Right? I think I'll have to take some pics with the flash for everyone to truly appreciate it's beauty.

Grump--Hahah, thanks? I had to look up the Luxor (sheltered life). And yes, thanks for asking...some of the little dogs do wear reflective vests.

I bought a cycling jacket for commuting around Edinburgh. It came in one colour: fluorescent yellow and reflective. And that's what every other cyclist was wearing. I felt like I was in uniform on the cycle path.

That is one badass vest!

NN--I was wondering if Scotland had converted you! Guess you'll be the reflective talk of the town now in Revy! :)

Gorgeous and as a medic I hail refectivity. Your karma balance rises.