I made the mistake of drinking wine around our class rep/journal club president a few weeks back wherein I agreed to do a presentation on my arctic nursing adventures...he asked me to make said presentation for today's Journal Club and it seemed like a good idea at the time. This morning I actually woke up with sweaty palms. That is how nervous I was.

Initially I was afraid that no one would turn up. I told my two close friends here and Manfriend that thay HAD to come so that there would at least be 4 people in the audience. Then I became very afraid that people *would* show up. Sweat. Palms. Underarms.

Much to my surprise a decent crowd of 1st and 2nd year students showed up--I mean besides my friends that I basically strong armed to attend. Even a handful of faculty, including the Associate Dean/Director of Education for the medical school. Yikes!

I think part of the turnout had to do with the poster my friend Mike made to advertise the event: 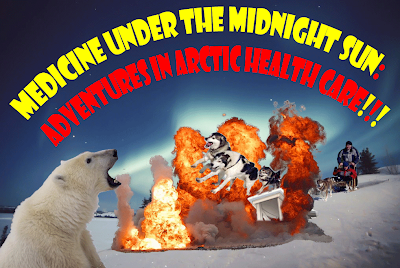 Ok so people came on some false advertising, and the promise of brownies....but hey...sometimes you gotta play dirty to draw a crowd.

Overall the presentation went well--I missed a few really big points that I wanted to make but managed to touch on most of them. My stats prof came up to me at the end and said that she loved it and wanted to generate some ideas for research up there--very cool. But the cherry on top was--as I was leaving the building the Associate Dean shakes my hand and tells me that he really enjoyed the presentation and then asks me if I'd like to skip into 4th year next year.

(That *was* my final answer but alas I think he was joking.)

I was feeling so behind after spending a big chunk of my weekend preparing this and not doing school work, but it was actually a lot of fun and already it looks like the Nursing and Midwifery school is going to have me speak to them!
Posted by Albinoblackbear at 10:00

That's about the most amazing poster for a lecture I believe I've ever seen. If only poster-makers at my university would employ such creativity...

Well done on the presentation. Glad it went so well!

I agree with Josiah - that poster would be enough to draw me to the event, brownies or no brownies!

But congrats on a successful talk anyways. Glad it went well :)

Most awesome promo poster EVER. Like an entire Steven Seagal movie in one frame. I could practically hear the explosion and the malamutes barking. Wish I could have seen that presentation, you must have been amazing, but of course :)!

JO--Truly. When he sent it to me I almost peed myself with laughter. I used it in the presentation and it got some serious laughs. He's a genius.
Thanks! Yeah I've never done a presentation like that before and it was actually pretty fun (though nerve wracking).

Maha--Oh but the brownies are seriously the BEST brownies I have ever tasted in my life. This lady at the farmers market sells them, and it is basically the main way to get people to show at Journal Club every week.

Thanks for the congrats. I am actually even more stoked about the nursing presentation on the horizon because seriously I thought nurses worked in hospitals only when I was a nursing student and had no IDEA what was out there.

Ninja--Right? And in the real power point slide the words were actually blinking in a seizure-inducing way as well. It was savage.

It was an extroverts dream really, a crowed room of people being forced to listen to be talk about myself for 50 mins! hhahahah

I think the people who are into Rural med were drooling the whole time. :)

Actually the best part about it was that a few of my classmates emailed me to say that it was so nice to see the light at the end of the tunnel and be reminded of what we are working towards. So that was really cool to hear.

I guess coming from a nursing background we know how amazing (and difficult) patient care is and we know what awaits...many people don't so it's good to have that carrot.

I LOVE the poster.

Congratulations on the talk going well. I am so excited for you!

I didn’t realize that the wildlife in Canada was so dangerous!

Glad it went well...mike is a creative lad

Congratulations. Glad the talk went well :) and that you were able to spread some rural med love.

You are a rocker.
Can you get me a presentation to talk about "Psychiatric Nursing in Inner City Toronto"?
Or plastic surgery in Western Australia, with the sub-heading, "I'm a Nurse, and a man, not your sister!"
I knew you'd nail it.
Lets touch base soon.

Congratulations on your presentation, but do be careful.

Holding an enthralled audience in the palm of your hand is a unique thrill that gets addictive very quickly.

OMDG, BINY, Liana- Thanks! Yes it was fun describing the trails, tribulations, and traumas of rural med. :)

RH--Heck YA! I didn't actually didn't realize the subconscious effects of being in places where polar bears or grizzlies can eat you if they so choose.

It wasn't until I backpacked around New Zealand and had deep restful sleeps for the first time ever in the backcountry. I guess I am always sleeping with one eye open in North America...

Keet--I think the sub-heading is very catchy. Yes, skype me soon! I am off FB for lent so track me down.

Rob--Oh I know...it's on of the many reasons why I miss being a musician so much! :)

Awesome! I bet you knocked their socks off.