So a few months back, my mother woke up in the middle of the night with a sudden recollection of some very good friends of my Grandad's. She hadn't thought about this couple in a long time and wasn't sure why she felt the compunction after all these years to get in touch with them, but decided to go with it. She tracked them down (thanks to google) and set up a meeting with them this summer.

From what I could piece together (without interrogating anyone for the minute details) was that Dora arrived in Canada as a young Chinese woman, to study at S.A.I.T, which is the technical college in Calgary. After finishing her secretarial program she became my Grandad's medical secretary. He became close with her and Richard, her husband, who was then a masters student trying to get into medical school.

According to Richard, it was my Grandad's letter of reference that got him in the door to medical school, his interviewer commenting on the weight that Dr. Russ Taylor's recommendation carried. Dora claims my Grandad was very much like a father to her, and that she'd never have become a teacher and then a "damn good lawyer" if it hadn't been for his continuous support and encouragement.

When people tell you things with tears welling up in their eyes, you simply have to believe that it is true.

I've spoken about my Grandad before on this blog. It almost feels wrong to extoll his virtues and accomplishments because he was a truly humble man who was never comfortable with praise. Sadly, he died from colon cancer about a week before my 8th birthday so most of my knowledge of him is second hand. I have only a handful of my own memories of him: playing the piano, letting me sit in his lap to listen to his mechanical heart valve (due to rheumatic fever as a child), reading his book in the high backed chair in the living room, and of him being one of the few adults I'd come across that spoke to me with a genuine interest and delight.

All of my life I've been steeped in stories of his astounding medical career, his profound love of medicine, his intelligence, insatiable curiosity, and his interest in the world around him. Each of these stories is locked in my memory coupled with the sadness that I was never able to know him as a health care practitioner, myself. Sad that I could never hear his opinions on certain procedures, ethical dilemmas, learn what he loved about medicine, or find out what frustrated him. Ultimately, I feel cheated that I never was able to have him as a mentor. Others have often described him to me as the 'greatest teacher and mentor' and yet I never had the opportunity to learn from him.

So there I was last Sunday, feeling guilty for taking a day off of my USMLE cramming, waiting to finally meet Richard and Dora. I was looking forward to meeting them, mostly because I always delight in having a few more details to add to the composite sketch I have of Grandad in my mind, plus it makes me feel somehow closer to him, hearing from people whose lives he's touched.

Their son, Russ (named after my Grandad) and his sister also came to lunch. Russ is a pediatric emergency fellow and his sister is a law student...as Russ half-jokingly pointed out, "we're replacing our parents".  The whole family is simply lovely.

At one point during our lunch, Dora pulled out a small bag that she'd brought in with her. She told me it was something that she'd kept for the past 30 years and she wanted me to have it. Even before she pulled out the contents I felt my pulse quicken with the thought, "This is going to be a treasure". It didn't matter what it was...whether it was going to be an old pager, or signed chart, fountain pen...anything! I couldn't wait to see what she was going to reveal.

Hours of my Grandad's cardiology lectures to medical students!

She had been the one that typed up the manuscripts for him, and had kept the old reel-to-reel tapes in a box in her basement. She told me, "These are his lectures on cardiology, and his notes for the cardiology textbook that he was working on!"

I felt a powerful wave of emotion roll over me.

All my life, all my adult life, I've wished I could hear my Grandad speak to me about medicine. And now I can. I couldn't contain myself, the tears just started pouring down my cheeks. There, in this trendy restaurant with a handful of photographs and an empty coffee cup to stare into, I could not wrap my head around it. In the final week of a very challenging year, studying for a terrifying exam and feeling completely over my head and second guessing myself at every turn, my Grandad's actual voice is given to me.

I cannot believe that this is a coincidence, I can only see it as him acting through people that he loved, to give me the little boost I need right now. Not only that, I feel so lucky to have made contact with this amazing family whom I very much plan to stay in touch with. 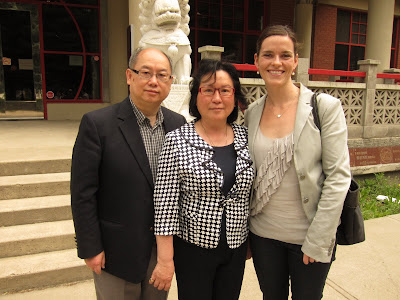 When we were finished lunch they took me to the Chinese Seniors' Centre in downtown Calgary and showed me the tai chi court which they paved and dedicated to my Grandad. 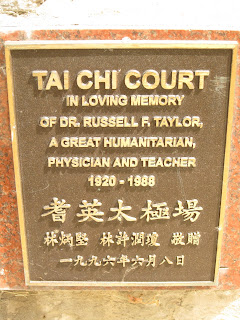 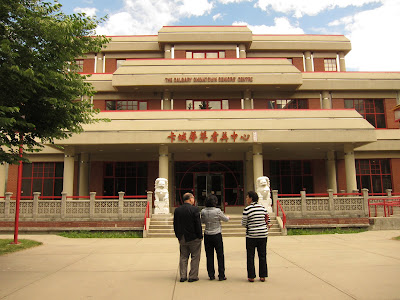 Talking to them about their careers, and about Dr. Taylor's career gave me an immeasurable dose of determination and renewed my understanding of why I chose this path. Not because he was a great physician but because I can see how his legacy continues to move and inspire others to achieve greatness.

In a week I'll be getting Tobie to transfer the recordings to MP3 and I'll finally be able to hear my Grandad's voice, which I've long forgotten the sound of, talking about something that always inspired awe in him: medicine.
Posted by Albinoblackbear at 18:59

It's incredible how things fall into place just when we need them to.

Good luck on your journey to the dark side.

What a great story! Courage!

Holy cow I should not have read this post 40 weeks pregnant on the eve of my pending natural induction.

What an amazing gift to have! He sounds like a man with an amazing legacy.

What a beautiful story. You are so lucky!

The seniors' centre is about 5 minutes from our house. It's nice to know the story behind the plaque.

Man, if I got choked up reading this, I can only imagine how you felt. How awesome to have those recordings.

BB--I thought so too, it was a pretty emotional day. Thanks.

Sara--Thank you for your thoughts and GOOD LUCK with zee bébé! :)

ThatG--I think so, and I am pretty sure I only know a small fraction of it.

Liana--Indeed I am very lucky.

I've never been to Kensington before (where we had lunch) and LOVED that area, and was really happy to finally see the plaque. I wondered if you'd see this post and know the Centre. :)

ERJ--I was basically a wreck, and momentarily VERY embarrassed at my reaction. My mom laid it out for me though and said, "if you gave someone a gift and that was how they reacted, wouldn't you be pleased?" and then I didn't feel like such an idiot.

Yes, very much looking forward to hearing what the tapes contain! :)

I'm so happy for you that you'll get to connect more with your Grandad! I am grateful to have had a similar family-but-not blood medicine mentor. That you received this special gift at just the right time makes me feel all warm & tingly inside.

It's also fitting that a tai chi court was dedicated in your Grandad's name. Did he have an interest in complementary or traditional medicine?

Just a few more days! (and btw, the ABB in the pic doesn't look anything like someone who has been studying for the MCAT for a month. You look amazing!

What a beautiful, inspiring post. Thanks for the smiles today :)

I have my grampa's voice on MP3 also - from a tape...it really brings back memories - he passed on at age 100 mind still intact - a wonderful person.

I can only imagine how much joy this will bring you...and how much wisdom will be revealed.

Where'd you have lunch? We're always looking for new places to try.

I love living in Calgary. You should move here!

Wow, I'm crying just reading this! What an amazing gift, something that will bring him back to you! The timing is wonderful as well. Best of luck to you!