My Uncle Pat was 19 years old when he was killed in WWII. His plane was shot down just weeks before the war ended. I've heard the story of the telegram arriving and it gives me chills. Something so many of us cannot fathom, losing a family member to war.

My Grandfather fought in WWII. As a result of his Airforce navigator service he was given free tuition in the university and program of his choice. He chose biochemistry and medicine at McGill and went on to become a legendary rural family doctor who then became a polio expert. He was on the team of physicians that brought the first iron lung to Canada. He then studied internal medicine and eventually in his forties went back to specialize in cardiology. After further training at McGill he returned to set up the first Cardiac Care Unit in Alberta.

When he was dying of cancer he continued to work in cardiology, as well as with his long-surviving polio patients. He wrote a memoir about the polio epidemic, and was working on a cardiology textbook when he died. The cardiac ICU at the University of Alberta hospital is named the Russel F. Taylor ward in his honor. I remember that whenever we stayed with him he'd make me scrambled eggs before leaving on his 6:30 rounds, and listen with sincere interest to my seven year old ramblings. 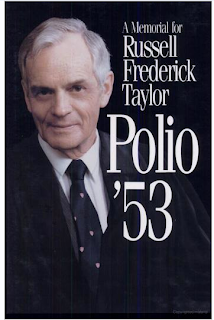 Both of my brothers are also soldiers.
Russ is a NATO and Governor General award winning combat engineer who is a world expert in post-blast forensics. He's completed over 10 tours of duty everywhere from Rwanda to Yugoslavia to Afghanistan. He is an absolutely wonderful father and husband to his family which includes 11 month old twins, Max and Ella...and the current star of the family, Gionna.
Shandy is a retired infantry Lieutenant Colonel. He too has spent time serving all over the world, including UN peacekeeping in Nicaragua and aiding with the set up of the interm government in Afghanistan. He is also an amazing husband of 18 years and father to his three children, Taylor, Aidan, and Rachel (and his current baby, the AC Cobra that he built).
I will never forget the dread that would accompany the news broadcasts when my brothers were in Afghanistan.  Every time a soldier death was reported without releasing the name there was a flurry of phone calls between members of my family.  Are they alive? When did you last hear from them? And of course the guilt that comes with relief that it was someone else's family dealing with that horrible grief.
Naturally, every Remembrance Day I contemplate the plight of soldiers and their families around the world. War, sadly, is not a thing of the past. Today we continue to have innocent civilians, aid-workers, soldiers, and journalists killed in conflicts around the world.
My thoughts and prayers go out to those families today that are remembering with sadness instead of thankfulness.
Posted by Albinoblackbear at 05:26

Email ThisBlogThis!Share to TwitterShare to FacebookShare to Pinterest
Labels: family

You have quite a family, ABB!

I really can't fathom what it is like to see your son/brother/husband go off to war, or imagine what it would be like to receive news that they were killed. We live in a different era now, mostly. Thank goodness.

Kudos to your brothers for serving.

(Have you ever thought about serving, yourself? As a doctor or otherwise?)

Hahhah, yeah, people think I am being a smart ass when I say that I am the underachiever of the family (but it's true).

I did in fact go through a year and a half of the selection process for the Airforce as a pilot about 11 years ago. Made it to the last 45 people out of 3000 applicants but they only took 17 that year and I wasn't one of them. Weird to think how COMPLETELY different my life would have been if I'd gotten in. One of those major 'sliding doors' moments.

I actually looked into joining again before coming here (to get sponsored fro school) but they wouldn't pay since I was going to be an international medical graduate.

I still think about doing some service when I am done medicine, my former roommate just got home from working as a trauma nurse in Kabul for 6 months. Experience of a lifetime.

amazing. Thanks for your story of your grandfather.

That's amazing - your brothers both serving Canada. May they continue to stay safe!