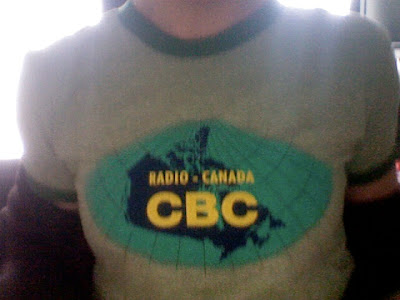 Yes, it was certainly another non-traditional Christmas in the land of Albinoblackbear. Last night we opened--well we didn't even open--we handed over our pressies.

I think I came out on top with an amazing CBC t-shirt (for my American friends, CBC is the Canadian equivalent of NPR--without the fundraising drives). I have an obsession with CBC. To the point where I even write fan letters to people like Eleanor Wachtel (for the record both her producer and the best interviewer of all time herself--Ms. Wachtel--wrote me back). Needless to say I haven't removed the shirt since it arrived in my hot little hands. Tobie (Manfriend) also gave me some great CD's, Rosanne Cash, the List and Chip Taylor and Carrie Rodriguez's Live Album. Double score. And to round it out, some beautiful jewelry from Tobie's mom and this insane piece of art that she bought for me because she saw it and thought that the woman looked like a 'lady doctor'. His mom is an artist so she finds these quirky things in the strangest places. Anyway, I love it and it's total uniqueness. 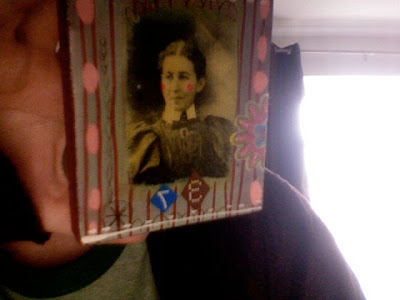 We went out to the pub last night to meet up with some of Tobie's friends from the orchestral music scene. I couldn't believe how wildly busy the downtown area and pubs were. People were crammed into doorways, reaching their pints high in the air to walk to a table of friends. Young, old and everyone in between was having a good dose of Christmas cheer. The packs of smokers huddled confined by rickety barriers on the outskirts of the pubs. We had some cider and hit the road back to the apartment. On our way by Arnotts they were pumping fake snow out of vents above the doors. Shoppers were streaming out speckled in large flakes on their peacoats and handbags. I had to laugh, being the to-the-core Canadian at the novelty that is snow at Christmas.

Got home and enjoyed a Christmas Eve feast.


Dessert was the best. 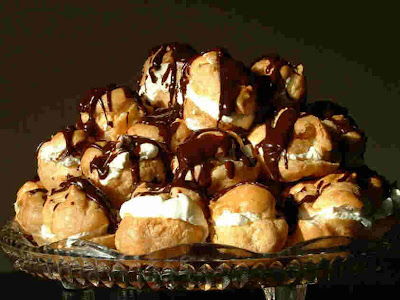 Behold the profiterole. Thanks to Marks and Spencer.
One of the major advantages of being with a Frenchman (well, a Quebecois to be exact). They appreciate (and endorse) the traditionally French dessert. Yum. Must admit that I enjoy it much more than my family's pumpkin pie finish to our Christmas and Easter dinners.

I was thinking about my last two holiday seasons which also were far from my family. Last Christmas I was working my yorkshire puddings off in a string of long shifts in an emergency department on the west coast. The Christmas before I was stranded in the BC interior mountains due to a large pass of black ice stretching between me and my relatives 9 hours away. Had a cozy celebration enveloped in the warm living rooms of my friends in Revelstoke.

My first time away over the holidays was in India when I was 20. I was staying in a rented room on a pig farm on the west coast of Goa. The toilet was an outhouse which had a small hole along side the squat toilet. When the door to the outhouse would open the pigs would squeal and fight their way to have it be their snout in the hole in time for the next delivery. No one believed me so I did manage to get a photo one night, the snout clearly visible between my feet. One of the other people renting a room at the farm knew I was a bit homesick and painted me a Christmas tree, the size of my palm, and stuck it on my door as a piece of cheer. I felt far far away from home.

Again I am far away from home and will be for some time.

But as Tobie always reminds me when I get down about being away--it's not where you are, it's who you are with. And I am loving our chance to enjoy some downtime in this magical city together.
Posted by Albinoblackbear at 06:21

I heard a story about those pig toilets in Goa from someone who said he avoided bacon (funnily enough) the whole time he was in India...

hahaah..yeah...I was a vegetarian at the time, the toilets definitely reinforced it!

No matter how far away you are from your loved ones, you are always close to their hearts, and them to yours.

Thanks William, I think you're right.

NN--I specifically put the pic up to impress you and the Gills. The only other people I know who can appreciate Micheal Enrights drone on a Saturday morning. I've been listening to old 'Ideas' podcasts when I get really home sick for CBC. Me and the Massey Lectures...we're like this *intertwines middle and index finger*.