So I was doing my daily read of Old MD Girl and her post was about 7 things that you wouldn't know about her. At the end, instead of 'passing it on' she suggested if you were reading the post you ought to write one of your own. I have been working on a couple of posts that are still...not ready so I thought this would be a good tweener...otherwise you'll be exposed to a lot of youtube videos. And that just seems unfair.

1. I was engaged once. Was a runaway bride in fact. That was 4 years ago and the slighted groom-to-be and I are still good friends. Whenever I go to the town we used to live in we have dinner and continue to be pleased about the fact that we never got hitched. He's married to someone else now and is ridiculously happy. I am happy for him.

2. I made it to the last round of selections for the Canadian Air Force to become a pilot. I got cut in Toronto after the final simulator flying and navigation tests. It was a process that took almost 2 years. I think it was one of those 'sliding doors' moments where my life would have taken a drastically different turn had I been accepted. Instead I took at year off school and traveled around South East and Central Asia.

3. I am terrible with plants. I kill any plant that has ever been given to me. I don't like to garden and hate the creepy crawly things that live in gardens. I know this is wrong and that I should embrace gardening and all it's bounty...but...gah...maybe someday.

4. Speaking of creepy crawly things, I am an arachnophobe. To an almost psychiatric inpatient level.

5. I would happily live somewhere that had maximum summer temperatures of 20 degrees celsius. I hate the heat. I hate being hot when I sleep, I hate direct sunlight, I hate that muggy humid heat, I don't even really like sunny days. I don't tan and have never been one of those people who hangs out at the beach. I like clouds and love the rain. Why am I starting to sound like an emo/goth/socially maladjusted woman? Hmmm....

6. I have a neuroses about my hands smelling like food. I can't eat wraps or things from places like Subway because I find that food smell just hangs on and it gives me the willies. I love to cook and from time to time after an epic meal I can still catch a whiff of garlic or onions on my hands and I need to go and SCRUB myself before I can enjoy the rest of the night.

7. I am a musician. I play piano, mandolin (badly), guitar (badly) and sing (pretty well I've been told). Had a pretty awesome band for a few years and we rocked some amazing shows and festivals in that time. My housemate here in Ireland found someone had uploaded our CD to youtube, which I thought was hilarious. Anyway, yeah...that's us. The George Bushes. And that is your homegirl, Albinoblackbear, on lead vocals. It's all original music...and I am still very proud of the music we made.

Anyway, if you are still reading...I urge the same to you blogosphere. Just because you drop random details about yourself it doesn't mean we'll figure out who you are. Or will we?? 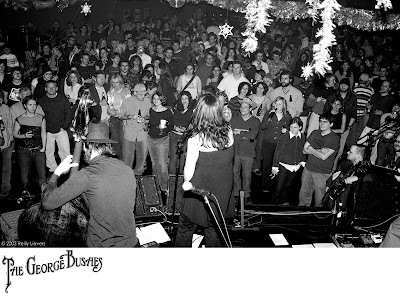 Loved the tunes. Glad to learn #7.

Thank you muchly. I've been really pleased to find some musicians here in my class. It's been great to dust off the mandolin and the vocal chords and get back into playing music regularly.

Former almost fighter pilot AND musician? Tell me again what you're doing in medical school?

OMDG--Haha, good question indeed. I just love not having disposable income and living in a scholarly bubble... :)

This was a really wonderful blast to the past. I don't know who uploaded those songs... but I have a few more goodies on my ole hard-drive and I may just upload those as well... :P

What a pleasure. And happy to have been there for many of these. and hopefully many more. Maybe you can mentor me if/when I go to med school. HA!
xo

2. I applied to the Air Force Academy, but did not make it far. It was on a whim and they do not seem to place whimsy high on their list of virtues.

3. There are more than enough gardeners/farmers out there to more than make up for the ones that do not thrive under your care. I'd rather take care of humans, anyway.

4. So we won't be seeing this video posted by you? The Who - Boris The Spider.

7. For the very badly behaved patients, I threaten to sing to them. Most wisely avoid misbehavior after that. Some actually require proof of my Super Power. MwaHaHaHa!

Was the band named after the father? If the son, either term or both?

I'll be listening to these on my commute.

You *do* sing pretty well. Nice music!
Also, I've found that the ones with a multi-faceted history are the most reasonable and normal ones among the med students. Unlike those scary "I went to med school right after graduating and actually had everything in my life planned out by the time I turned ten"-people.