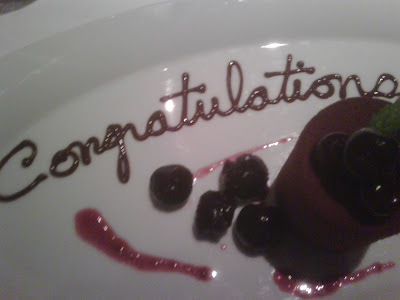 So after 5 days of nail biting and fielding the q 3 hourly calls from my mother seeking "updates" I finally broke down and called the admissions office. I spoke with one of the directors whom I met when I was in Toronto for my interview. He said, "is there a drum roll in the background?"

I was unconvinced, "Double check and make sure I am not on the list by my first instead of last name".

He laughed, "No no, I just opened the offers list and here I see your name in capital letters!"

And with that I realised my goal. It has been literally years and years in the making.

I never really believed that I would ever be capable of getting accepted. It took me 9 years to get up the courage to try those pre requisite courses again, after dropping out of chem and physics in my second year of university. I can still vividly remember being on the pay phone with my mother after my devastating physics midterm, crying and telling her I'd never be a doctor all because of physics--and feeling sooo frustrated and that the world was completely unjust as a result of that fact.

That memory makes me smile now.

So Jerry and I began drinking bubbly at about 1600h. We lounged around and went for dinner at this wonderful restaurant in town which uses as many local ingredients as possible--spectacular food. He told our server what we were celebrating and when the black forest cake (my absolute favorite dessert in the world because it was my birthday cake every year when I was a child) arrived there was the scrawled "Congratulations" on the plate. I had to take a photo, Jerry wouldn't let me use my camera so I did it a bit more stealthily with my phone (no flash). I couldn't resist!

It was pretty much a perfect day.
Posted by Albinoblackbear at 11:34

Awesome!! Congratulations, doctor to be. Does it work out cheaper than the Caribbean? I would imagine that though it is still a big move, it may be easier at the other end of medical school having done it in Ireland, whether you stick around there to work or head back home. Can you get part time/holiday work there as a nurse?

Congratulations. You have achieved my dream. Judging by your excitement, your joy at treating patients in the outback, and your perserverence at something you knew was absolutely right for you- you will make a fabulous doctor! Please keep us posted. I am delighted for you.

Welcome to the profession :)

hey WOW! Thanks for all the congrats!

KK--still waiting for your call. :P

DF--sadly no, it is in fact about double the cost so I will likely be negotiating a return of service either with the NWT or Nunavut government to give me some funding. Or join the military. Or sell my soul and do Botox--kidding.

BB-Thanks! Maybe we'll bump into each other in Northern Canada in a few years!

Fordo--Very kind words. Thank you. I hope to keep the blog running as often as I can, as this is the start of a new journey for me. It is fun for me to look back on all of the experiences I had up to this point. I am sure I'll feel the same way when I am through medical school.

CH-Hey maybe this will make me want to go to our 20 year reunion now! hahahah Or not!! It just wouldn't have seemed right to go to the 10 year and say, "oh yeah, things are great...I am living in my friends parents basement right now and taking an organic chemistry course...haven't worked in a year..." :)

FD--Have to admit, your comment have me a bit of a chill of excitement! Thanks!

Haha. I had a cousin (who hadn't contacted me for years) contact me last year and ask when i could do botox. Hmmm....
It is interesting (not in a good way, but in a human nature type of way) to see how acquaintances and younger relatives who used to make fun of me for being the serious, nerd without a cool car are now getting very excited about me being a doctor in a few months and earning "lots of money". (Definitely respectable but not exorbitant by Australian professional standards). Hmmmm....

Nice dudette...welcome (again) to the club! It's always nice to see people who deserve it getting in with proper motivation (unlike that "craigslist killer" at BU.

Definitely keep on writing...it's a good way to keep your sanity when the books start getting to you.