So, I am here in BC doing an orthopedics elective. But really, I am doing an everything elective. I've worked in this hospital before as a nurse and most of the doctors know me. I want to scrub for surgeries, stitch wounds in the ER, catch babies, intubate, whathaveyou. So I need a cell phone, otherwise no one can reach me when wounds / babies / femurs are presenting themselves.

I walked into the 7-eleven and looked for the cheapest phone. $39. Brilliant. I asked the attendant to please fetch me the $39 phone from behind the counter. He looked at me strangely and said, "Er....are you sure you don't want a nicer phone? These ones are only $100". I waffled for a moment but held strong. All I need this for is "baby coming" texts. Status symbol, status schmimbol. Give me the ridiculous one.

I was quite proud of my new phone so during my next shift I whipped it out to show one of the murses. He burst out laughing, "Dude!! You've got a burner!!"

"It's a phone that drug dealers use so that their calls can't be traced. They're disposable. Hilarious. You totally will look like a dealer every time you take that phone out."

Now I feel old, and crazy out of touch with slang.

The next day I get a text at the nurses station and I'm trying to thumb my way through a response when one of the other nurses starts pointing and laughing, "NICE BURNER!!!!"

Siiiiiiighhhhhh. Am I the only person that didn't know this term? Apparently if I watched The Wire or CSI I'd be well versed in these matters.

I sent a text to my orthopod to give him my number (since we were on call) saying "Here is my mobile number courtesy of 7-eleven" and the next day in theater he tells me that his wife saw the text and asked him who was sending him messages from a burner. 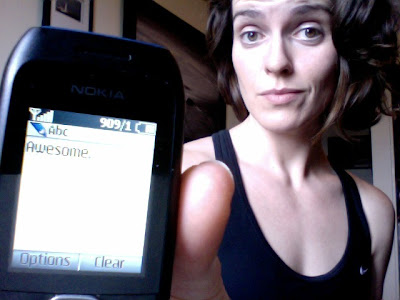 It's no iphone 4, it's small, it is ridiculous. I look like a complete rube (and low-life, apparently) when I try to text from it. But you know what? It is almost so lame that it feels cool. In fact, I like that it is ghetto. It feels slightly rebellious and hip to not be showing off what apps I can get on it. I wear rubber boots to work and I own a burner. It is just how I roll these days.
Posted by Albinoblackbear at 23:45

1. Yes you are the last person to know what a burner is.

It comes with pros: great battery, indestructible... and, at least in my case, is the only mobile that gets signal inside the 'bunker' (down in the ORs pit).

side note: your hair looks AWESOME in that photo. :)

Two thumbs up for burners! I got a burner as my first phone maybe 4 years ago and haven't looked back. Cheap is the key. Hell, my current burner is an Android that they sent me for free after I had some complaints.

If it makes you feel any better I'm in my 20s and I didn't know what a burn phone was either!

2. I had one of those phones myself until about 6 months ago.

Have fun catching lots of babies!

Giuseppe: YES! Oh, I'm proud. True! I haven't had to charge it since I bought it (over a week ago). Will have to test it in the O.R. hahaha

Megan: Awe gee, thanks! It's sorta a 'tweener' right now (i.e. between short and long) but I'm starting to like it.

Chris: Awwwwww yeah! That is hilarious. A placation burner. :D

MedStud: Indeed, it does make me feel better! hahahah

OMDG: Ok, not quite the *last* person. I did have to explain it to my mother! hahah Yes, hope to catch some babies, apparently there are a lot of 'ripe' ladies in town. :)

Dag yo! Snoop 'n' Chris be down wit yo burner!
I just learned about burners from The Wire. Best show ever, by the way.

you are way cool!!

Never heard of a burner. Then again I drive five minutes and I'm lost in corn fields for hours on end, so my reality may not reflect the general populations'.