Last week I was whining to Paddy (our surgical SHO) about the fact that my bike needed a tune up, M.C overheard and kindly offered to get it road worthy for me. From this, the topic of the Blasket Blast road ride came up. It is an organized bike ride that goes around the Dingle Peninsula, along some of the most breath taking scenery that this country has to offer. So M.C asks Paddy and I if we want to enter the event with him as he's going to be participating. In true ABB form, I agree without asking any questions (you know, shoot first, ask questions later). I either didn't hear that it was 150 kms or figured that he was exaggerating.

I forgot all about the discussion until a few days later when M.C informed me that he'd paid my registration. Paddy was out because he was on call and couldn't get anyone to switch (how hard he tried is unknown!) Right, so at that point I started asking for details because the longest road ride I've  done is ~70 km in Prince Rupert TWO SUMMERS AGO. He tells me it is 150 km and 8 days away, that was when I started to get really, really worried. This was compounded the day my roommie met M.C and uttered immediately afterward: you are so screwed! He looks seriously fit. Great. Thanks.

Thus began my week of fretting and bike riding. I did ~80 kms last Sunday, then two 35 km rides during the week. I had no idea what was going to happen but I figured I better give it a lash.

I did enjoy the carb loading part of the whole thing and took it to the next level...indulging for several days before the ride. You know--popcorn for dinner, hummus and crackers several times a day, granola by the handfuls...and chocolate mousse the night before (there are carbs in chocolate, right?) 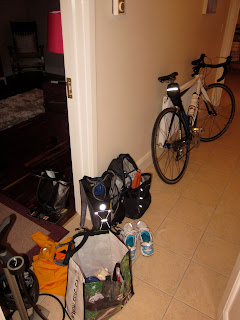 A scene from the night before, all the food and water ready. And spare socks. Of course my riding shoes with clips were nowhere to be found so I busted out the sneaks. Awwww yeah.

So there were two rides, one that was 110 kms and one that was 150 kms. We were doing the latter with about 40 other people, men in tights to be specific. Ok, there was one other woman doing the long ride...at least we think she was...a woman. If you note the biker in the background you'll get an idea of the one-piece spandex jumpsuits and waterproof clip booties that everyone else was wearing. All the long riders were SERIOUSLY decked out. We looked like we'd found our gear at a garage sale the night before, by comparison. Both M.C and I were also the only people wearing running shoes. We got some very disappointed and looks and clucks throughout the day due to our athletic faux pas of epic proportions! 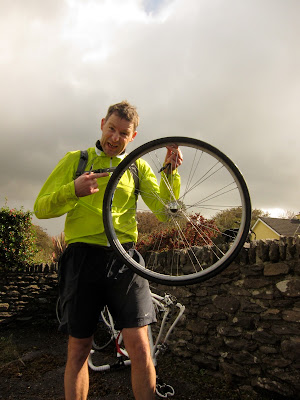 And then there was the flat tire. The guy who stopped to radio the support car with a foot pump informed us that he hadn't gotten a flat in 4000 miles. We were undeterred though our place at the end of the line was definitely secured. 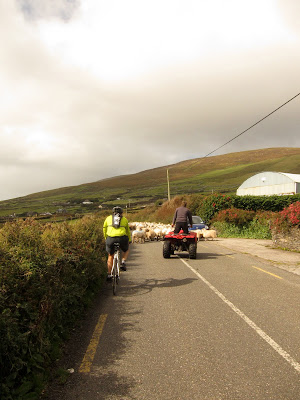 And then we got stuck behind some sheep. As you do, when you're riding the Tour De Irelande. 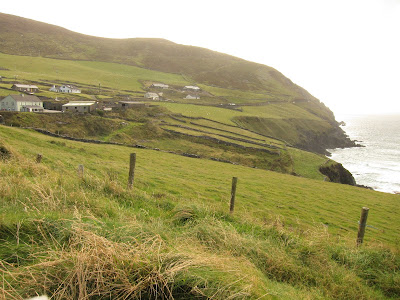 Some lovely scenes from the day. 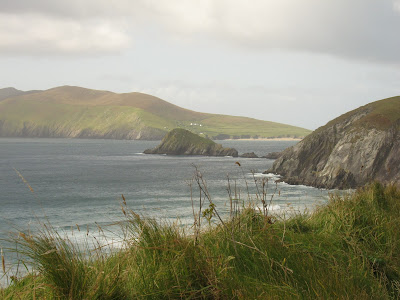 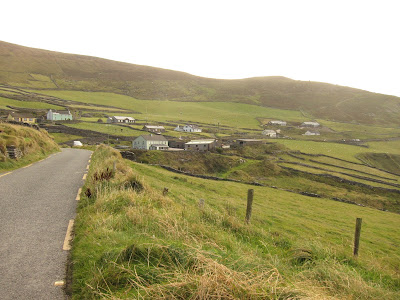 The above photo shows the Irish version of a 'highway', and how wide a bike rider can expect the shoulders to be. 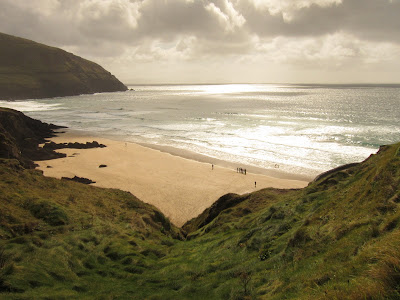 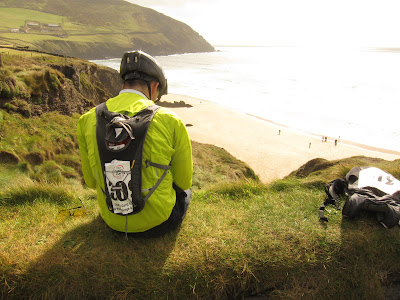 First lunches. And a latte from a road-side bus! This was my kind of race. 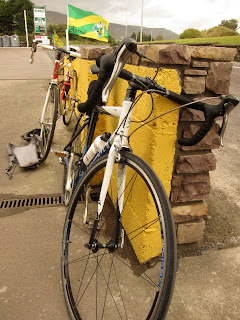 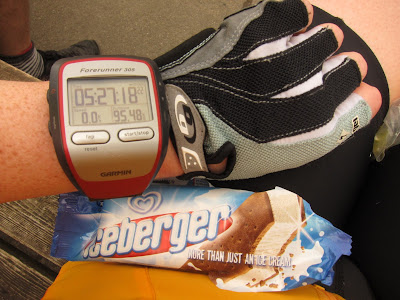 At the 95 km mark we decided it was time for ice-cream. 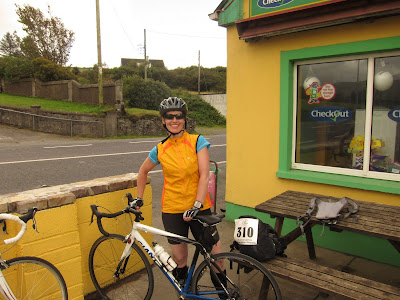 And a photo op of the old ABB and her bike. 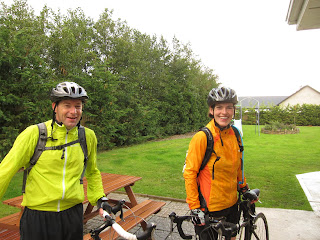 Finally! Several hours, 150 kms, 2 pairs of socks, 2 lunches, 3 coffees, 1 ice cream, several rainstorms, and 3 pee breaks later we arrived back at the start. We had a really fun day, actually. I even managed to pull out my last bit of juice on the final summit and trash talked M.C all the way to the top.

And it was GREAT!!

I am so glad I did it. I love it when I surprise myself! Go Team Sneaks!!
Posted by Albinoblackbear at 13:13

(You are SOOOOOO going into surgery.)

That's amazing! I'm not sure I've biked 150 km in my lifetime. Very inspiring, and gorgeous pictures. My travel bug is awakened once again.

Found your blog through OMDG and Solitary Diner's blogs :)

your post makes me want to run another marathon (and someday buy a road-worthy bike for bike marathons).

OMDG--Yep. It is starting to look that way more and more everyday. The other day M.C said to me, "you should be a trauma surgeon!"

I thought of you instantly. :)

SD--It was a gorgeous day, the views kept me distracted from my muscles! :) Ireland is definitely a must if you've got the travel inclination.

Mingle--Yes, a marathon is still on my bucket list...but I think I am a stronger cyclist than runner. So I might just stick to the bike from now on. Dunno.

Road riding is FUN though because you can cover such great distances (and get little breaks on the downhills!!)

My goodness. I'd need a surgeon before I even got halfway through that trip. But it sure looks lovely. Congratulations.

Once again, you rock! And yep, I have to agree with OMDG that you would make an awesome surgeon.