A friend in my program recently got dumped by her boyfriend of two years. It was one of those horrible 'out-of-the-blue' dumps too, which is the worst I think. I've had one of those as well (on my answering machine, I might add) and it really was profoundly hurtful and difficult to process--dealing with the shock and the pain at the same time.

Without getting into too much detail, they were suffering through the beginning stages of a long distance relationship. Many of my classmates are in the same boat, studying medicine here and trying to maintain a relationship with someone back in Canada (or in another Irish locale). From completely anecdotal examples I can say that relationships seem to be on the chopping block when it comes to medical school. Then add the distance. I think it takes a very special combination of people to survive long distance alone, without one party being in the all-encompassing-entity which is our program. A remark that was made was "one by one we watch the relationships fail in our group of friends". And it's true, so far.

My aforementioned friend and I bumped into each other in the stairwell the day after it happened and we hashed out the hazards of being a 30-something-female in medicine. In a word, it's treacherous. Suddenly the reality of age is upon us. Don't get me wrong, I know we're not old by most standards...but basically take the fears that some single 30 year olds have and multiply that by a factor of, many.

The 30's are supposed to be our most productive/lucrative/peak-of-existence times in our lives. We are enfolded in the tight embrace of heavy workload, high expectations, competitive surroundings..and we're paying for it (partly in actual cash dollars).

"I'm in medical school" or "I am a medical resident" is instant man-deflector line in most social situations. I think that combination of words is actually heard as "I am an intimidating, career driven, over-achieving, heartless woman who puts her man last" by males of the species.

Our eggs are shriveling. The two cases we had last month involving fertility and abnormal pregnancies/birth defects were definitely stressful to the older women in my program who wish to breed. One of the comments my recently single classmate said was "should I freeze my eggs?" You just DON'T have to think about that when you are a 22 year old medical student. I don't think I want to have babies yet I found myself feeling very constricted by the time line ahead of me if I were to change my mind. I actually had a moment, starting at yet another photo of a birth defect, where I thought--"should I freeze MY eggs??" It was a scary moment. I was pleased when it passed.

On not much of a different note from above--the super-women who do have babies in medical school have an incredibly tough chore balancing the mother/student/wife/self...yet there seems to be this expectation that it ought to be possible and you are not (super)womanly enough if you take a year off to focus on one of the above things. I am already thinking I'll need a year holiday after medical school to re-water my soul by doing things like learning Portuguese and becoming dazzling at finger-picking on the mandolin...but I digress.

It has just caused me to pause once again on the choices I've made to get to this place (an inevitable choice I believe in becoming a doctor). I go on and on about how I value all the things I did in my life pre-medical-school (like nursing, traveling, playing music) but sometimes I think that the advantage truly does lie in pursuing these types of studies earlier in life. Already some specialties are off the list for me because I simply don't want to put so many more years into the schooling part of things. I hate that feeling of a time limit. Especially when 30 doesn't feel like an age where one ought to have those concerns.


So much living to do, so little time. 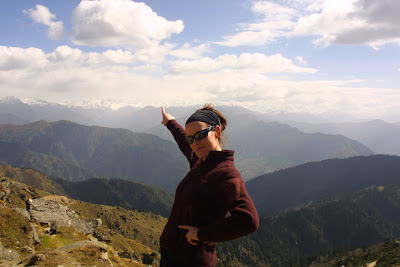 (Last fall in the Himalayas...me in my happy place).
Posted by Albinoblackbear at 09:34

I want to say something wise and somehow not trite, but you just lay out the facts, and I have to agree. You've made tough choices, done amazing things, lived fully, in each moment, and here you are realizing your dream of becoming a doctor, in your own time. If you don't freeze your eggs for you, can you do it for me? I want your babies. LMAO! (only sort of kidding,)

I knew several women in my class that ended up taking time off to have a baby. I think in the overall scheme of things, 1 year doesnt make a big difference, especially when facing the reality of possible birth defects w/ AMA and what not.

It definitely is a tough situation for women since after med school theres residency, which is a even bigger time commitment and if you want to specialize, thats more schooling. Tough to find a "good" time.

I agree that taking a year off (for babies or otherwise) doesn't matter all that much in the scheme of things. It is interesting to see how is all "relationshipped up" and who isn't by the end of med school. There are break ups, divorces even. Some people end up with classmates. A lot can happen in 4 years.
But totally with you about the man deflecting power of saying you are in medicine. (Except for when you are actually TRYING to deflect them).

Keet--It'll cost ya! You'll have to take a break from cashmere and Barbour. ;)

K--Yes true in the grand scheme of things perhaps not a big deal to take a year off...that being said...our class has made tightknit groups already and I think it would be quite disruptive to join a new class and not have those connections (especially with cheerios in your hair and no sleep for 3 days straight).

Apparently a 'good' time is when you're 45 and can have a surrogate and a nanny.

DF--'Medcest' *shudder* I am sincerely planning to never fish in classmate waters...

And yes it seems that when you want to deflect no strategy is effective.

It may seem hard now (and I'm damn sure it is) but the support of understanding friends can make many things in life just that little bit easier... (from a friends of the dumped 30 year old :o)

I try really hard not to think whether or not I will have found someone by the time I make it into med school. Its a bit depressing to think I may not be married until residency, but hey, if the guys aren't going to understand the "this is my passion and dream part" then I guess waiting is what I am in for.

I hope your classmate finds some good support in you guys.

My favorite part now is when I muse about reproducing soon, and people tell me that I "have plenty of time," and that, "I should wait until fellowship."

Then I point out that I will be well into my 40s by that point, so that is a non-option.

So, my husband and I will try during the next few years. We think. I'm eagerly anticipating the lectures about "how hard" it will be for me, and waiting to get jerked around about my funding. *Shudder*.

Anon--You've been a great support and I am sure she really appreciates it.

EMT--I have made more than one posting about the fact that the pursuit of medical school has definitely made nurturing a relationship with someone a very difficult task. One that I am apparently NOT very good at. And these were not failed because my partners were intimidated or unable to cope with the 'strong woman' persona. These were quality guys.

It really comes down to finding someone who is okay with uncertainty (i.e where you get in) and not being a priority. Those are really big (unfair maybe?) demands.

OMDG--Uhhg, YES--the unsolicited life advice, my personal favorite...especially when it comes from people who don't know me/my values AT ALL. That is when I slip into fantasy of wrapping hands around neck. It gets me through. Though I have to say when the time comes I am sure I'll enjoy (and be able to relate) your rants on the blog. ;)

Medcest? LOVE IT. The coinage that is.

Right up there with "lactard" for those lactose intolerant friends. :)