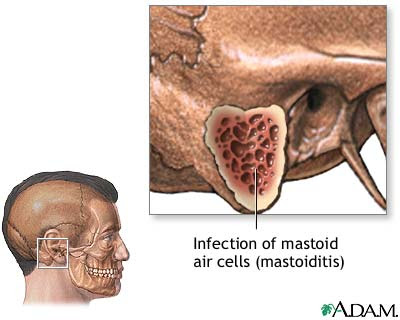 2 days ago we had a confirmed (by CT) case of mastoiditis!! This may not seem overly exciting to some folks, but really, it is quite a cool and rare thing to see in North America. Mostly because it is a complication that can arise from an untreated inner ear infection (which almost never happens because ear infections--often viral and self-limiting--are usually treated with antibiotics). It was in a patient who had had ear pain for several days following a dive, but had left it until he became unable to sleep due to the discomfort. He presented to the ED with abd pain and dizziness but as he was checking in also mentioned his ear ache.

We had a brand new doc on, doing her first locum in an ER so we were all just getting acquainted. When she came out of the room and asked the radiology tech to be called in to conduct a CT of the head we all looked at her like she had two of them. The charge nurse was clarifying,

'I think he's got a mastoiditis.'

Naturally I went in to take a look, because I am nosey. And I wanted to see why she was suspicious. It is a bit of a zebra diagnosis for an ear ache.

He was exquisitely tender even as I gently pulled his ear up to look in with the scope. I saw a very boggy, swollen, angry looking tympanic membrane with some bloody drainage in the canal. Ohhhh. It looked ugly. And I have seen MANY nasty ears in my time on Baffin Island (hence the colloquial term 'Baffin Ear'). He had only mild post auricular edema and no remarkable adenitis. So we had been a bit skeptical to call in the tech as well as waking up the radiologist who is on call EVERY night and never gets a day off. But sure enough, the CT showed (not the actual CT below but one stellar comparison) the fluid filled area where air ought to be---note the right sided mastoiditis on example below. His looked exactly the same. 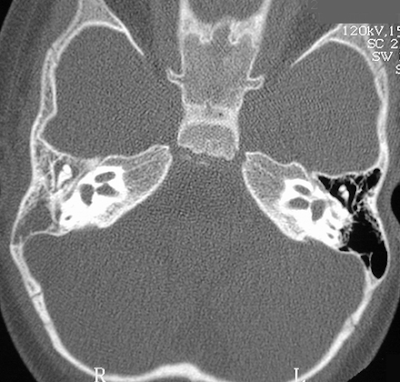 So he was admitted, ENT consulted for the morning, started on IV antibiotics and analgesics. We all complimented the doc on her good catch. Many would have sent him packing with an amoxil script. She said the main thing that caused her to suspect the diagnosis was the level of pain that this guy who 'didn't seem like the type to complain' was expressing.

The second cool thing that happened was I got to give my first cortisone injection! It was a combo of cortisone and marcaine (the marcaine is a longer acting anesthetic--what your dentist uses to 'freeze' your mouth). It was on this guy who was complaining of severe, chronic shoulder pain. He was a very tall bodybuilder and had massive shoulders, covered in tatoos. This made the bony landmarking somewhat of a challenge but apparently I did a bang up job because he said he never even felt the injection. About 15 minutes later he walked out of his cubicle, came up to me and said 'my shoulder has NEVER felt this good, I cannot remember a time when I didn't have pain!'

Ahh, that was just the marcaine talking. But I took the compliment nonetheless. He then asked if I'd do his other shoulder while he was in the department! It was great. I was happy to have the doc talk me through it and glad that the outcome was a positive one (and that I didn't rupture his tendon or something!!!)

All in all, it's been a good week.
Posted by Albinoblackbear at 15:07

Okay, just to clarify, you injected marcaine and cortisone into his shoulder capsule? Like as a treatment for arthritis related inflammation or something?
That is awesome, and would have freaked me out completely. As in, i want to do it under a general and with xray/CT guidance. Good for you!

Yeah! Into the bursa. Dude, if you were under general you probably wouldn't do a very good job! hahah :P

Thanks. I was pretty stoked.

I was telling RAH stories the other day and wishing you were there to do some interpretative moves to represent the events.