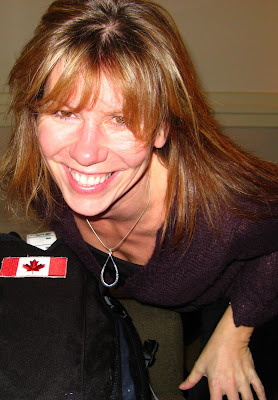 Todd told me that Jody might not make it through the night. The indolent DIC had caused her to have multiple pulmonary emboli and her respirations had become labored, O2 sats dropping to the 40-60% range. I found this out in the back of an ambulance as I was returning from a spiral femur fracture transfer.

Earlier, I had received a message from my ED asking me to go on the transfer. I had no time to listen to the other 2 voicemails as I raced home from hot yoga, showered, changed, and headed back to the ED for the trip. It wasn’t until 4h later that I finally listened to the remaining messages and heard the one from Todd.

Too late to catch the last ferry to the island I went home and packed. I caught a few fitful hours of sleep, got up at 4am and drove to catch the first ferry of the morning. The whole time I prayed my phone wouldn’t ring with another call from Todd.

Jody was diagnosed in October 2007 with breast, lung, brain, and retinal cancer. She had just turned 39. In the ensuing months it spread throughout her bones and internal organs but she kept her sharp wit and smile. She somehow continued to glow even as the cancer raged inside her. She’d turn to you and say, “Look at me! Look at my skin! Does this look like the skin of someone who has the cancer?” And you couldn’t deny it--she was gorgeous.

When she was raising money for lung cancer research she told me—“lung cancer is the dirty cancer. There is much less funding and fund raising for lung cancer because society thinks it is only deserving smokers that get it. Well, it isn’t.” It made me take a look at my own buried biases about obesity and heart disease, diabetes, and yeah…cancer. She never smoked a day in her life, was athletic, and a veritable fireball of positive energy. She didn’t do anything to deserve this, but really—does anyone? I am still unable to stifle a bolt of anger when I see a 60 year old obese chain smoker and think—Jody will never get to that age.

In this world you will come upon a select few people who have a spark, a light in their eyes. People who draw you into their orbit simply because they take such joy in the dance of life. Jody was one of those people. I have always been in awe of her ability to act on, seek out, and attain all of the experiences she wanted to have in this life.

Our first night shift together in the ED I knew she was my kind of woman when she told me she was learning to grapple—and was the only female in her class. Soon there were two females and our friendship grew from there.

I was able to make it back to the island on time and even had one last visit with Jody before she slipped into unconsciousness. Her breathing became wet and ragged. Several of us gathered around her with Champagne and cake, telling stories and laughing about our many adventures in Jody-land. We took turns holding her hand and rubbing her back as she continued to work to breathe.

One of the hospice nurses, Christina, set up a bed for me on a fold down chair in a common room and I curled up for some sleep after we had arranged Jody so that she and Todd could fit in the bed together. I dreamed of Madeline, my mentor and beloved nursing instructor who taught me so much about grieving and death.

Around 7 am this morning Jody took her last breath in Todd's arms as he wished her peace and love. Her nurse came and introduced herself to me as Madeline. I shook my head at the coincidence.

Jody's wedding ring from Todd depicted the symbol of the Hummingbird totem, a Haida symbol often associated with marriage. I found this excellent summary of Hummingbird symbolism, the words describe Jody with shiver-inspiring accuracy...


When we assume hummingbird consciousness, our life becomes a wonderland of sensuous delights. We live for beauty, delighting in flowers, aromas, fine mist, and delicate tastes.
When it becomes our totem, the hummingbird teaches us to laugh and enjoy the creation, to appreciate the magic of being alive, and the truth of beauty.
Hummingbirds awaken us to the beauty of the present moment. As they dance the four quarters of embodied existence, they bring us medicine to solve the riddle of duality....
Hummingbirds teach us fierce independence. They teach us to fight in a way where no one really gets hurt. They teach us simple courage....
In hospice, the tradition is to open the window when someone dies--this allows the spirit to fly free. Then someone will travel upstairs to the garden on the roof and ring the bell to notify the spirit world that a new arrival is on the way.

When Todd went upstairs to ring the bell a hummingbird appeared on the roof. He marveled at the birds proximity. As Randi and I joined him on the roof we hugged and cried for a few moments before we noticed the bird had returned and hovered close by, it's tiny wings a blur. The delicate creature stayed near and we couldn't help but feel a sense of wonder and reassurance.

Jody is free now, and though we are sad she only was a part of this earth for a short time, we rejoice that we were among the lucky ones who got to share it with her.
...Only when you drink from the river of silence shall you indeed sing.
And when you have reached the mountain top, then you shall begin to climb.
And when the earth shall claim your limbs, then shall you truly dance...
Kahlil Gibran
Posted by Albinoblackbear at 21:15

There are no words that are appropriate to ease the death of someone, who was a kindred spirit.

Yes that is what we all are endeavoring to do.

This story reminds me of something I hope I never forget: that even in the most tragic and difficult circumstances there is beauty to be found in this world. Thank you for sharing.

WH--Yes, that theme has been illustrated to me time and time again, especially working in the health care. When you are open to seeing beauty, you'll find it--right?