If several trees fall in the forest...

We had a huge snow storm in October. 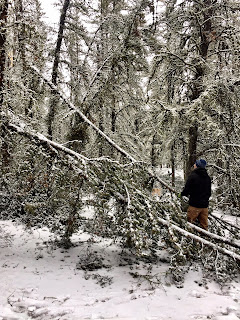 On the first day heavy wet snow came down in giant flakes. It fell fast and the trees which hadn't yet lost their leaves were weighed down by the sticky clumps. We had a day of respite where the trees stood, just a bit hunched over. The orange and red leaves still clinging to the branches. It looked like frosted sugar icing over all the fall colors.

Snow with that degree of commitment doesn't usually come down so early in the season. Usually we have at least a few weeks of bare branches, frozen grasses and grey skies before snow fall.

But, on the third day it really came down. Again the same heavy giant flakes fell for hours and hours and hours without letting up. It fell all day and continued into the night. The trees became more and more burdened. 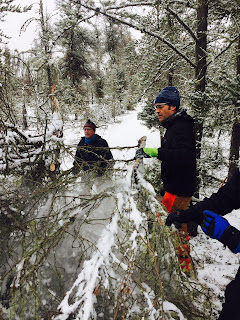 During the night the snapping and cracking of bark could be heard throughout the town. Many of us were awoken by the sounds of huge trees giving into the winter weight. The power went out. So many trees had fallen onto power lines that over 10 000 residents of the province woke up to a cold house and a back yard of destruction. Including us.

This weekend we volunteered to work on clearing the cross country ski trails. It was my day off and for once I wasn't on call so I dragged my arse out of bed and then dragged my hubs and pups along.

It was such a fantastic day.

It was the perfect temperature. The dogs were in heaven. It
was exhilarating just to spend a physical day outside, breathing in the scent of pine needles and spruce gum, mixed with the exhaust of the chainsaw.

Brings me ring me right back to skidooing as a kid, being pulled on toboggans, screaming with laughter and forgetting how cold my cheeks felt. Then heading home, warming up, and having the best sleep a kid could ever imagine.

Here are a couple before/after shots of our work (with Monty photobombing, of course). We finished up the 3km and the 5km loop, for now.  Nothing like a day in the woods, working until you're muscles ache, to let you forget about all the work that needs to be done everywhere else in your life. 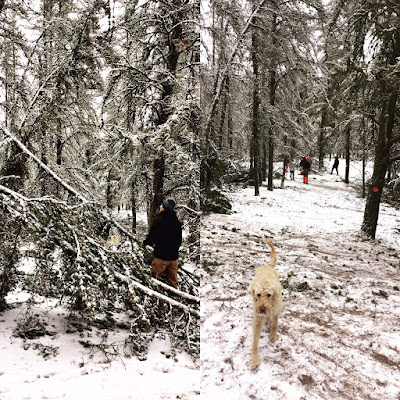 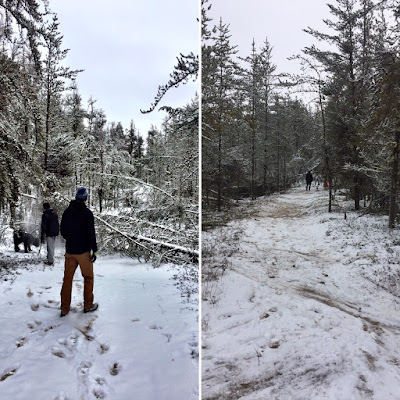