My sister informed me in a huffy way that it had been too many days since my last blog post. So, hello again, blog world, and hiya Dust!

The days just seem to be so long and groundhog-esque I start a post and think, "I am boring myself" and I close it. I've been doing that lately with emails as well, I'll spend half an hour writing someone an email and then I just delete it. It's mostly that I feel as though life has become quite one dimensional, it is a good dimension, don't get me wrong. I just fell uncomfortable rambling on to others about it.

It is also the pace of life these days unsettles me, like when you're on a train and think you're not really going that fast until another train passes going in the other direction. Suddenly the force, speed, and momentum is clear and almost frightening.

There have been a few trains going in the opposite direction lately.

I spent a good part of my morning with one of our palliative patients. She is a lovely woman and as she spoke about the impact of her recent diagnosis I made no attempt to hide the tears in my eyes. I used to be quite good at remaining buttoned-down with my reactions to patient's emotions (working in the emergency department gave me a lot of practice). She was just so open and honest with me, held my gaze, and for most of the interview gave me unflinching details of her ordeal. So when she cried, I did too. And I think it was appropriate. I have no idea though.

I also assisted with a below the knee amputation. That was my first limb amputation, having seen a great toe removed before. My normally jovial consultant (M.C) was thin lipped and quiet for most of the lengthy surgery. At one point he simply said, "God I hate doing these procedures." I suppose a surgeon simply cannot get the same satisfaction from amputating a limb, compared to cutting a cancer out, or removing a troublesome gallbladder.

But it wasn't the bone sawing or muscle slicing that I found unnerving. It was how quickly the patient reached for my hand and how tightly he gripped it before the anesthetic whisked him off to sleep. A couple of weeks ago I had met him, a broad burly man, who was gruff and a little abrasive. He wanted the procedure because it was going to improve his quality of life but I felt his reservations as soon as his giant hand engulfed mine.

So today, in an effort to slow things down a little I ventured out to the mountains and hiked in an area known as the Eastern Reeks. The ground involves a lot of bog walking and slippery rock negotiating. The forced concentration and good conversation gave me a much needed break from thoughts about the hospital and school.

I am definitely going to make an effort to get out at least once a week. Especially once my foot is completely healed. Yeah. It is possible that a 6h hike today may not have been what my ankle needed. 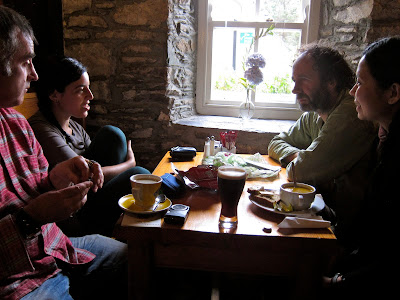 A long day outside was definitely what my head needed though. Also, the unwinding pace in a cottage with beer, a fireplace, and hot soup, was perfect.
Posted by Albinoblackbear at 17:41

I can understand the reasons for professional detachment. And if one were to be emotionally involved with every patient, I'm sure burnout would happen too quickly for all those years of education and training to even be worth the time.

But please don't lose that spark, that connection with those who need it.

It's frustrating to not be thought of as a person when going through some of the things I've been through in the last few years.

Ha, I just wrote about this briefly yesterday.

We had a presentation this week about crying, and the majority of doctors who presented thought that tearing up when a patient was already crying was a good trait.

Having been a patient myself, I know I would have appreciated it.

You've hit on why I haven't posted as much since starting the clinical years, tho' I do keep the blog around for when the posting urge strikes.

Some of the surgical residents I knew loved doing transtibial and transfemoral amputations. I could not, for the life of me, understand why. It's the one common surgery I managed to avoid seeing -- somehow my classmates always accepted my offer to let them go in those.

As usual, I'm struck by the gorgeous places you get to hike. I hope you'll take full advantage during the short time you're there!

I def get where you're coming from in the one dimensional postings. I delete half my posts because it's the same thing, or something that is specific enough to med school that it's boring to everyone except me.

Keep it up and always find the time to enjoy something each day. When you can't find something you enjoy, even for just a moment, something needs to change. It's always worked for me. Good luck! At least you're closer to the end than I am.