And I Shall Call It: Margaret's Game

So last week I hosted a birthday dinner for my friend Eileen. Tobie told me I had to change things up and not cook anything Asian for once (wha?? But I love CILANTRO!!! All meals MUST contain CILANTRO!!!)

He advised a traditional turkey dinner instead. 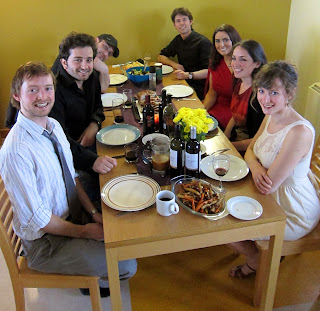 Easy for him to suggest since I was the one cooking. Anyway the turkey, cranberry sauce, mashed potatoes and gravy, roasted carrots/parsnips, Whitewater salad, salmon and horseradish-crème-fraiche toasties, triple berry bread pudding...all happened. Yeah, because nothing says "Summer" like a roasted turkey dinner. And yes, that is a French press with gravy in it, plastic cutlery, and coffee cups being used for wine glasses. Eat your heart out Martha Stewart.

Dinner was pretty good and Tobie actually helped out quite a lot in the gravy and mashed potato department. More proof that he's a keeper.

After dinner we played a game. G'head and roll your eyes but it's quite entertaining. So I will pass on the instructions to all of you for your next social gathering (and no, you are not too cool to have fun playing this).

1) Get everyone in the room to write down on 2 scraps of paper a word, collections of words, or saying. That is, each person makes 2 contributions. It can be anything from nonsense to novels. Some of our (less offensive) examples included:

2) Put all the scraps of paper in a bowl

3) Make 2 teams (we naturally did girls against boys)

4) Start the timer at 2 mins, the first team tries to get through as many of the papers as possible before the time runs out. In this first round you can do or say anything you want (other than the actual words) to convey the clue, i.e. if your clue was "spider babies" you could say, "arachnid children".

5) When timer runs out then it is the other teams turn. They go through what is left of the clues (if any). Each team tallies up how many papers they successfully got in the first round. All clues go back into the pot and round 2 starts.

6) Round 2 starts with team who didn't start first round. Now this time it is like charades, you can do any movements you want but can't speak, at all. Go through as many clues as you can in the 2 mins, next team gets remainder.

7) Round 3 now you can not use your hands, just body. Same rules as above. 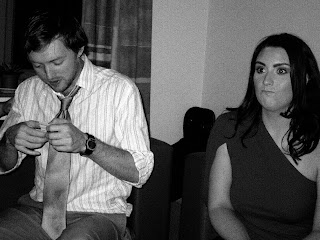 8) Final round you can only use your eyes.

So you add up all the points from each round. Or alternatively you can just keep track of who won each round. But some people like a pack of overly competitive medical students enjoy having a breakdown of individual points for each success.
I don't think we need to get into who won (by only TWO points) it is more important to say that a great time was had by all.
I think from here on in, this activity will be (cleverly) called, Margaret's Game. It was, in fact, the lovely Margaret that introduced us to it last year on a bus to Killarney and again got it going after the birthday dinner.
Not only is it hilariously fun, it is also a fairly good way of ensuring that the evening will not spiral into a long, dragged out discussion on some random medical topic which completely alienates all the non-meddies around.
Posted by Albinoblackbear at 10:56

ooooh! You like cilantro? (btw, I always associated it with Mexican food-!)

I have a great recipe you would LOVE for a cold Cilantro soup. It's to die for. Got the recipe from my Midwife friends when I was living in California....

Do email me (or post in comments) the recipe please! I'd love to give it a go. =)

It is fun, and you'd be surprised how hilarious is "eye only" round is, considering people are just randomly shouting clues from past rounds.

I'm so impressed that you host real dinner parties in med school! I unfortunately lack that gene as my mother failed to pass it on to me. I also lack the gene to figure out how to stylishly tie little scarves around my neck.

But I DID get the cilantro-loving gene. Cilantro is amazing in Indian, Southwestern American, Mexican, Burmese, and Asian cuisines. You can also make cilantro pesto!

Meh. I could take it or leave it (cilantro, that is). As PGYx mentioned, I too am envious of your ability to cook things that do not come from a package or require less than 3 steps.

That game sounds really fun though.

I vant to play this game.
Maybe when I come to Ireland in the fall.
You can cook an honourary dinner for me and there can be LOTS of dishes with cilantro, because I LOVE IT!!!!