Glimpse into the Arctic

Many of you who read this blog know that I spent 2 years doing contracts as an outpost nurse in the Canadian Arctic. I often find it hard to put into words many of the experiences that I had there, or what it was that kept pulling me back. The work was very challenging, mostly well outside my knowledge base and comfort zone (as a nurse who had only been working for a year and a half). But clinical learning curves are steep and dizzying, and soon I found myself missing the autonomy and excitement that the North held for me, especially when I returned to urban ED's where I was not at all involved in determining how a patient would be managed.

Recently a very good article was written in the Globe and Mail about Nunavut. If any of you have ever wondered about the realities of the Canadian Arctic and the Inuit people, I highly recommend reading this piece. It will certainly give some insight into the world that I spent some time in, and the struggles we, in turn, faced as health care providers*.

Cape Dorset (the town heavily featured in the article) was my first Northern contract and I can tell you, it was a profound culture shock. Unsettling too, living in a place which produced such beautiful and unique art...as well as brutal and horrific violence. Many of those mentioned in the article are people I remember, and it deeply saddens me to read about the dangerous unraveling in that town. It is not hard to imagine, when you read the statistics on Nunavut, why MSF equated my Northern work to "3rd world experience".

A flood of memories came back to me as I read the article. I saw first-hand the results of the violence and poverty during those days as a homecare nurse.  I saw the threadbare existence of one of my elder and infirm patients whose son would leave only bruises and cuts on the old man's balding head as evidence of his visits. Not only on my patients, I would see the reality of the violent community even on the faces of our staff, like the interpreter I worked with, who showed up one Monday morning with two black eyes.

There was the young girl, who stole her grandfather's pain medication so she could sell it on the street, a girl I naively thought was so sweet for picking up his prescription. Paulassie had severe rheumatoid arthritis, and despite his condition remained a renowned soapstone carver. During homecare visits I would often find him in his back porch (when temperatures were well below -30) painstakingly working on a sculpture, many of them destined for high-end galleries in Montreal, Ottawa, or Vancouver. Through the interpreter he'd tell me stories about his early years living in igloos and animal hide tents, hunting and fishing with his father. As a young man he was a guide, often taking the early doctors and nurses by dogsled to the scattered settlements when Inuks needed emergency treatment. Wild stories about blood transfusions in tents, from staff to patients when births resulted in hemorrhages, or tales about those that survived hunting injuries only because the air was so cold it froze the blood before they could bleed to death.

He promised to carve me a little stone nurse on my next visit. Sadly, he died before my next contract there, and I often wish I had asked to buy one of his smaller carvings as a reminder of this man and all that he represented. 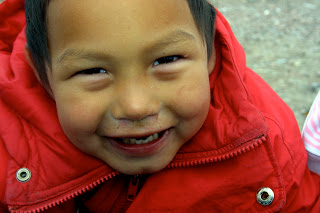 So many more moments came to me from those days in Cape Dorset, staring from my office window across the glare of the searing white tundra, seeing the reasons for the hopelessness which permeated the health center sometimes; the ongoing TB outbreak, the domestic violence, the malnourished children, the alcoholism, the young pregnancies, the deplorable housing situations, the lack of meaningful employment for local residents.

Yet that isn't the full picture, and I suppose I'd have to sit typing for a long time to accurately try and convey the beauty in those tiny hamlets, scattered across the North, connected only by airplanes. The mirth that has remained despite the hardships, the strength of the women and men trying to better their communities, the natural talents of many print-makers, carvers, and story tellers. The ability that some still have to survive on a landscape that would kill most us in a few days.

I am going to go back there someday, when all these USMLE questions and elective requirements are a part of my history. For now though, I have to pretend to see the importance of learning about G-coupled proteins and which enzymes convert pyruvate to oxaloacetate.
---
*Of course, I would be remiss to write a post about the North and not mention my favorite book written about the place, Consumption, by Kevin Patterson.

Damn, you're a good writer.

I was born in the Philippines where electricity is sporadic and indoor plumbing has only recently begun to make its way into the areas where my mother's family is from. I have childhood memories of visits back... People bathing in the river with the carabao, bamboo huts with dirt floors, trips to the city with thousands of homeless crowded under bridges and along waterways, of people existing at a level of poverty that seems impossible as I type this from my home surrounded as I am by every imaginable modern convenience.

It is sometimes difficult to remember what would be unimaginable hardship for us is every day life for others.

That's exactly what I thought. Thanks for sharing.

Was thinking exactly what Grumpy was as I read this post.