In an effort to wean myself off music (no earphones allowed during relay race in June) I have decided to try running to the not-so-dulcet tones of Edward Goljan's pathology lectures.

I think it is safe to say that most medical students know about Lord Goljan or G Pac as he is lovingly referred to on his FB fan site. You could say he wrote the book on pathology, because he did. THE BEST book on it IMHO: Rapid Review Pathology. 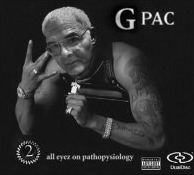 I usually need some heavy beats to get me up the hill outside campus gates but tonight I had [insert hard American G.I accent here]:

"look at that...what IS that...NUTMEG...does that look anything like a NUTMEG LIVER?? NO!! I don't know who decided that NUTMEG liver looked like NUTMEG. Must have been someone with CATARACTS...someone with corticosteroid use induced CATARACTS...did you know that corticosteroids can cause CATARACTS?? Not glaucoma. Anyway..."

But, it worked! Ok my pace was slower than usual, because he's good but he's no black eyed pea. I was surprised though at how having my brain engaged actually let me forget my usual, "I hate running, ow, ow, ow, remember to smile" mantra. I have been feeling guilty lately about taking time out to exercise what with my study and review for school plus study and review for USMLE schedule. But now--huzzah! I can cram and run at the same time! I do realise that maybe it is a bad thing to combine recreation with studying so I am still keeping up my yoga in a Goljan-free zone.

Funny FB fan site. I'll have to remember his name and book for future use.

NPO--It is honestly the book I use more than any other. As long as you've got a good exhaustive resource (like Robbins) for things you want more fleshed out, then Goljan it is great.

I think it is worth it for the bilirubin diagrams alone! =)

I have never seen that pic before.

Funny, that is not how I pictured Professor Goljan.

Yeah, not exactly how I would have pictured him either...there are vids of him arm wrestling students on youtube. Hilarious.

Why are you weaning yourself off of music while you run? Is some sort of medical student self-torture?

NN--The relay race that I am hoping to do in June has a strict "no headphones" policy! ARgh!

Otherwise I would not be experimenting with other options. Not running with music appears to be torturous to me in many ways as well.

How have I never heard of this fellow or his book? I am a second-year veterinary medical student...NO FAIR!

is it funny or scary that JUST TODAY i, too, was running while listening to him. I used his lectures when I studied for Step 1, and now Im using his other for Step 2.

Lori--It's never too late to become a follower of Lord Goljan! =) Find the pirated lectures, buy his book and you'll become a pathology master in no time! hahah (And no, I do not get any money for endorsing him.)

Lynnie--I'd say it's more on the funny side, it'd only be scary if you tracked my IP address and started running beside me while I was doing the same! hahah

Ooohhh! I didn't know he had Step 2 ones as well! Excellent.