Today I got up early and took dose 2 of the cholera/E.coli vaccine that I purchased in Canada. Since it has to be taken on an empty stomach it made me pretty nauseated. Especially when I stared thinking about what was contained in the cloudy liquid I had just poured down my gullet. The B-subunit of the cholera toxin I am ok with, but the whole inactivated V.cholerae count was rather unsettling.

After breakfast (of hopefully limited bacterial load) we piled into Jeeps for the long road drive to our first camp. I was in a Jeep with Cathy, James, and attending Liz.

The classic "do I have anything in my teeth?" photo... 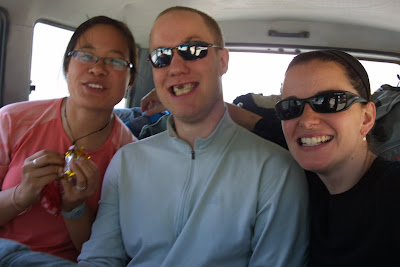 We had an absolute blast in the jeep, entertaining ourselves with various car games like, "what is that lorry carrying?" Time flew by, surprisingly. At one point we stopped to stretch our legs and get some air. I took this photo as it was not an uncommon sight to see very small children wandering alone. This little one certainly seemed like she could hold her own. 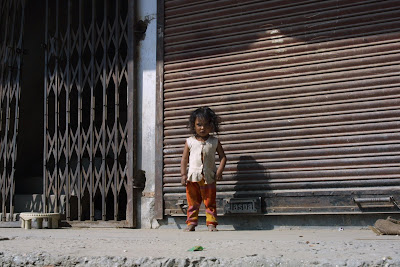 After snapping the photo I walked around the side of the jeep, trying to negotiate my way around the deep mud and the standstill gutter which was full to the brim with black, murky, 'schmegma' as I like to call it. As I opened the door to the jeep and attempted to keep my telephoto lens from banging on the side I slipped and ended up calf-deep in the gutter. In the shit gutter. The black, liquid, toxic waste, oily, slime gutter.

I totally panicked. I didn't know what to do. I just stood there for a few seconds with my mouth hanging open, my heart racing, and my stomach churning. Liz sprung into action...dumped a large zip lock full of tylenol out and told me to drop my shoe in it, grabbed large bottles of water to rinse my leg and pants off, told James to find me some scrub pants, and asked Cathy for some spare footwear.

A few miles down the road we stopped at the side of the river so I could rinse off my clothes, leg, shoe, and orthotic. I would have taken a photo but I was still traumatized by the event.

Unfortunately there was a jeep of fellow volunteers parked behind us when it happened so it wasn't just my car that saw the incident. "Shit shoe" was my initial nickname, which was later shortened and softened to "Shishue". We decided that Shishue also sounded more Asian as well and was therefore more fitting. People have already started using expressions like "pulling an Erin" or "having an Erin moment". Great. As usual I make an impression in a group almost immediately for better or for worse...in this case the latter obviously.

The rest of the ride was uneventful except when one of the other cars in our caravan got stuck. 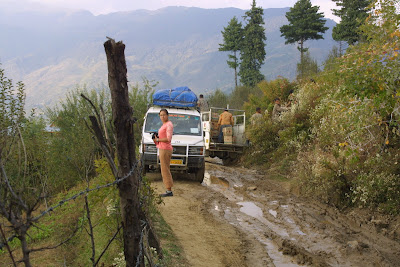 We arrived, set up camp, and then figured out our roles for the next day. I am working in the Triage tent which ought to be interesting. 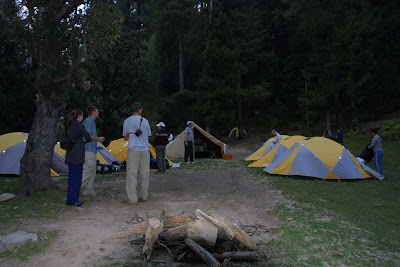 From one orthotic wearing, card carrying nerd to another.