Remember how my good friend, Cathy and her hubby, Nate, recently came to visit from Amar-ica and happened to be here for St. Patrick's Day? Well, at the time I didn't post the photos, but clearly some needed to see the blog light of day.

Prior to St. Patty's we also got up to all kinds of shenanigans which might be featured in future posts: eating-in-the-car picnics, visiting abandoned Work Houses, seeing the Cliffs of Moher, and some near-death experiences too.  For example, when I was almost hit by a giant tour bus while taking Cathy and Nate's photo. Note the looks of trepidation mixed with excitement. Also note they are in no way alerting me to the oncoming bus as I step farther back to take a photo of them holding their first official "Burdock's Fish and Chips" meal.

Crisis averted, both the smoked cod and I remained in one piece (ahem) and we were able to carry on with our touristy photo shoot. It was around this time that we started noticing people in Dublin getting pretty excited for St. P's day even though it was several days away. Lots of hats were already being sported, fake beards (did you know Leprechauns have beards??) and green sequins. We thought we should get some costumes in order. 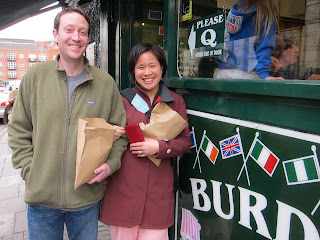 But not until we saw Iron and Wine in concert. Oh, and the lead singer walking down the street before the show. You just can't be walking down the street with a balding pompadour and a crushed red velvet jacket and not expect someone to notice you. Of course, by the time I was confident it was definitely him, he was well up the street and I realised I didn't know his actual name. What was I going to yell:
"Hey! IRON AND WINE GUY!!! Er...WICKED!!!"???
The thought did cross my mind, I will admit. The concert was great and his new record is very much a departure from anything he's released in the past--big sound and very peppy.


But we had hats to find.
After haunting every authentic "Made in China" Irish goods store we could find, and trying on a multitude of ridiculous items we settled on our St. Patty's day outfits. And they were grand indeed. Cathy almost bought a giant, solid silver skull at one point in a strange goth-Irish-souvenir store. I blame jet lag on her momentary loss of shopping reason.

We met up with Ryan and then were easily spotted by our Irish friends, despite the parade crowds...why you may ask?? Mostly because we were the Only. People. Dressed. Up.

Yeah, except for a few 5 year old's wearing green GAP sweatshirts and people who clearly had gone off their meds for the holiday weekend, we were the only ones that really took the days theme to the next level. Turns out, only people in the big cities really get gung ho about the dressing up thing. Yeah, people were taking pictures of us at the parade. Including a reporter from an English newspaper. Oi.


Ok something needs to be said about the fact that Nate looked freakishly like both an unemployed Leprechaun in a tuxedo-t-shirt AND Abe Lincoln. That has got to be the most dichotomous costume combo to ever be successfully pulled off, yet pull it off he DID (the theoretical combo not his costume).


After the parade and pubbing we retired to my friend Emma's house for a wee gathering. The noisy bustle of child minding, feasting, cooking, and beer-drinking went into the night, and it was a heck of a swell night. And now ye have seen what becomes of Canadians and Americans who find themselves dressed in green in a small town in Ireland, on St. Patrick's Day.

I love the pictures; it looks like good times were had by all.

I especially like the last photo of all of you in the room, I wonder if my camera can do that?

Thanks! Yes, indeed. Well, if your camera is an American pediatrician then yes, yes it CAN do that! =)

I can't take credit for that shot (I was helping with dishes at that point). Cathy Lee took it and I am guessing she just used a slower shutter speed with no flash and a steady hand. Can you change your settings to low light/no flash??

I'm sure I could, and will be fooling around with it this weekend to see what I can come up with, plus I totally got a kick out of the last post with the photos on the way to your school and will be trying that out for myself. However my walk consists of only about 1 block, but it's still fun to do. Thanks for sharing.

I always kinda got the impression St Patty's day was just bastardized by us North Americans as a not-so-subtle excuse to drink.

I learned something today :)

And I have no idea what camera setting I used for those trippy pictures at Emma's house. At that point, I had had enough Bulmer's that I'm surprised I had any gross motor function at all. Plus it's a new camera. Which means there is little to no chance of recreating that magic again.

Thanks for posting...miss you, lassie!

Lord, I miss Burdock's chips. It's been over 25 years, and I can still taste them if I put my mind to it. Do they still use the coal fired fryer?

Doctorcalm, I tried taking the same angled picture yesterday morning, and my darn camera just focused on the stove or sink, but not so much as the panoramic/wide angle view your camera created.

Well either way, it sounded like a great time you all enjoyed.

Zazz--Glad you enjoyed, actually got a lot of nice feedback from those, even though I felt they were extremely self-indulgent I wanted to capture that exact part of my life...and share with those who might be interested. :)

DRCALM--Miss you too! Oh I hope I can come visit you guys some time in the next year!!

LG--Hmm! Good question. Would the coal aspect of it be easily identifiable?? I've never walked in and thought "hey, that is one crazy coal fired fryer!" So I am not sure, but *next* time I am there, will find out.

Yeah their fish & chips are amazing. Tobie and I make a pilgrimage there every time we go to Dublin. We've learned to split an order though, to avoid 'the regret' that inevitably comes with eating that much grease! :)

When I was there in the early 80s, the fryer was perpendicular to the front window, and you could see the door for the fire box on one end. It looked remarkably like the business end of an oldfashioned steam train engine. I did see them stoking it once, which just reinforced the railway aspect.

Unfortunately, even if I ever get back to Dublin, I'll have to forgo the fish part, since I'm now somewhat allergic to wheat, and even Burdock's best is not worth the minor GI distress and the migraine. I can probably handle the small amount that might be on the chips if they are still fried together, so that is definitely on my "must-do-in-Dublin" list.