In Other News, I am dating AJ from the Backstreet Boys

So this weekend one of my classmates had a 90's themed birthday party. Tobie decided to go as A.J from the Backstreet Boys. I must admit I had to google the guy because I had no idea who he was referring to.

So with a little hairspray, mousse, eyeliner, and shaving cream I managed to transform him into a creepy 90's pop superstar.

I told him he should just recycle the outfit for Hallowe'en and go as Andy Sandberg in the Dick in a Box sketch. 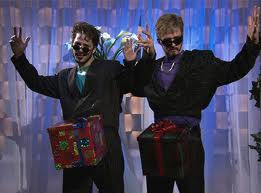 His only concern was that the lack of SNL in Ireland might lead to an arrest if he went out in public like that. I figure it's worth the risk.

---
Ninja--My costume wasn't nearly as good...I went as Elaine from Seinfeld. I really should have just been a groupie with A.J. Mind you, that would have involved a sequin miniskirt and heels...and no one deserves to see that while they are trying to digest their dinner! :-) 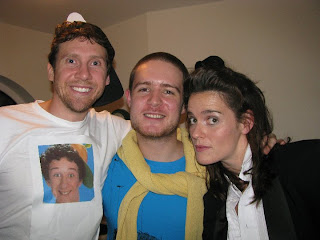 AHHHHHH!!!! EYES ARE BURNING MUST MAKE IT STOP!!!

I was seriously disturbed in the cab to the party. I kept looking over and jumping with surprise. Terror/surprise.

Wow quite a, er, transformation :)! What a good sport!! And who did you go as?