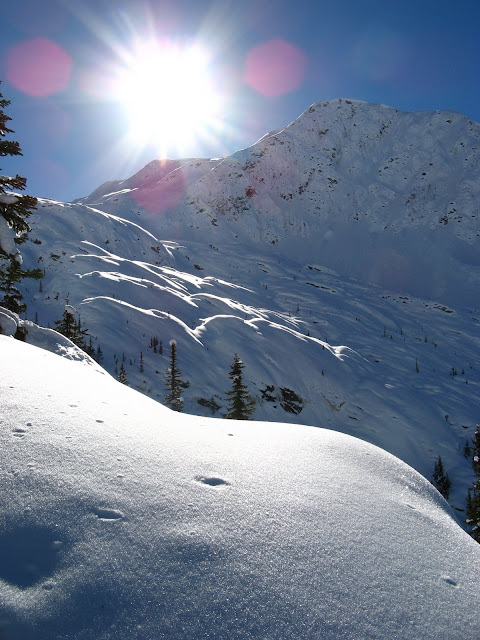 Last night I dreamt that I was skiing. It was one of those powdery-goodness days. I was flying, and landing.

More often than not I have nightmares, so this was a wonderful slumbering reprieve. This morning I remembered it so clearly, it left me giddy with the emotional imprint and a little sad with nostalgia.  I wanted to make a post about how much I miss certain parts of my former life. I found this post from my original blog, Feb 20th, 2008. And of course, a video which ought to make you laugh. Turns out transitioning from telemark to alpine bindings isn't that easy (i.e. 'fixing the heel does not necessarily fix the problem).

Anna and I had one of those perfect days at Rogers Pass yesterday. Bluebird skies, great snacks, good conversation, fluffy snow, warm sunshine. It rocked. We went to the "toe" of Pearly Rock and did two mellow loops and enjoyed a picnic lunch in the sun. 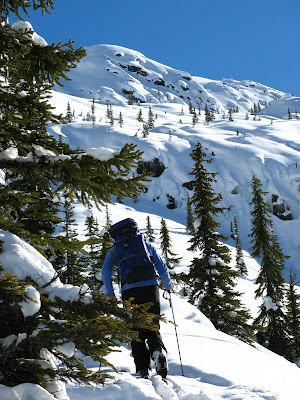 After I slid backwards, slow motion style, into the tree well Anna took over the trail making part of the excursion. The new bib pants paid for themselves already, kept me nice and dry despite the 'face shots' which were in fact, ass-over-tea-kettle-shots...though I did find pine needles in my underwear and bra at the end of the day...not sure how they made their way there...
I asked Anna if she wasn't afraid of losing her sunnies in the snow--only then realising that the former heli-ski and backcountry guide probably hasn't wiped out since 1995. I remembered: not everyone goes halfway down the fall line on their ass like I do. 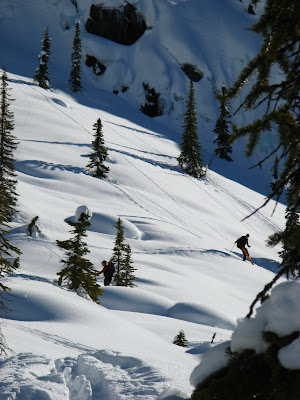 These guys poached our line while we were snacking....which is what you get for making most of the sweet uptrack I suppose. No bother, there were still a few acres of freshies to be had. And plenty of space for me to drop and roll. And yard sale. Behold the video of humiliation. 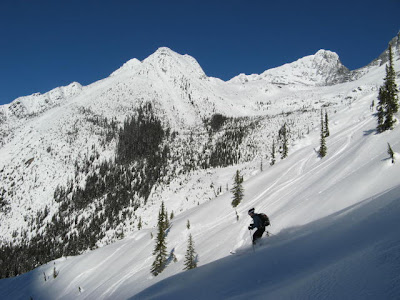 Woot! Some proof that I can stay upright after all!
Posted by Albinoblackbear at 03:05

Sunny and -17 this morning at Apex with a few inches of fresh powder from the day before. Glorious.

We could use some new docs in town...

One of these days I am going back home to enjoy some riding.

Kirkwood is calling me.

ABB-I totally understand the longing for some good powder.

I've been alpine skiing since I was a little kid, but have been thinking about doing some backcountry skiing this year (and then began the free vs. fixed heel debate). There's a kind of interesting video on youtube about a guy who was really into telemarking, and then ended up transitioning to alpine touring (or randonee, or whatever you'd like to call it). http://www.youtube.com/watch?v=AMlMb_X_71E

If it makes you feel any better, I'm stuck in London and am missing out on ski season this year. Not sure how much I would have been doing in the backcountry right now anyway since we just had one of the biggest avalanche cycles in the past 100 years or so.

Research--Sweeeet. You had me at the wine comment earlier but now you're really talkin'! haha

RH--I used to work with a nurse in Whistler who lived there, she said it was beauty.

Thing is, it is not just good powder I am missing--but the getting up early, the coffee in the car, the slog, the snacks, the sky, the feeling-tired-but-awesome après, the best sleep at the end of it, the ski clothes drying on various lines around the house. Sigh. And, the powder, course! =)

Greene--I think I would have stuck with tele if I had stayed in Whistler skiing on the hill. But in Revy, everyone was into mostly backcountry and I wasn't a strong enough tele skier to keep up in the crazy pow pow out there. (It should be mentioned that I was no whiz on alpine skis, but I had to be dug out of face-first-snow-burials a bit less often!)

I miss the work out from tele though. I had some seriously strong ski legs my second year!!!

Liana--Indeed, the one and only! She is a legend both on and off the slopes. And watching that woman ski...sigh...amazing.

Thank you, yes. My tele wipeouts were probably even more hilarious than that as I usually ended up tangled in an alder or with my head stuck between my tips. But that one was fairly humiliating as well.

Love that clip! I'm glad it made it back to the top of the blog for a re-visit.
Don't worry, the skiing's terrible out here. Really. I swear.