Another Boring, Eye-Rolling Year in Review

I was getting excited about doing a year in review post until I read Michelle Au's blog this morning which said;

Don't worry, I'm not going to do an actual "Year in Review" post, because I do think that treads the line between boring and inviting people to kind of roll their eyes at you, because for God's sake, no one wants to hear your blow-by-blow of the year when you already keep a blog, for chrissake.

Which is probably a good point and should have steered me away from doing one (as I could probably take a tip or two from the superwoman-queen-blogger-extraordinaire-specialist-mother-of-two-sarcastic-hilarious-book-publishing-Asian-woman).

If you want to be bored and roll your eyes, please, read on! Or if you are new to the blog, consider this a mini-montage to bring you up to speed without having to sift through countless whiny posts about studying.

I actually don't see Jan 1st as the great big marker of time in the sky like many people do. But this year, I was by myself on New Years Eve (a first). This allowed some time to really reflect, and gave me the self indulgent space to read through the last year of posts to see what things I ought to keep a little more in the forefront of my mind when I think: 2010.

Because in a lot of ways, 2010 was a really exciting wild ride of a year (even though most of the time while I was in it, life seemed quite mundane). I don't want to look back and only remember one long study session.

--Becoming an auntie to TWINS! On Jan 1st my brother and his wife had two lovely, healthy twins named Maximus (Max) and Ella. And though they are Gerber quality, they are not 'designer twins' despite the trend.

--Hearing Dr. Robert Gallo speak. Crazed Peta People and boundary-less audience members aside, it was a thrilling lecture. He's pretty much the equivalent to a medical deity, yet he comes across as a very humble, curious, sincere gentleman.

--Seeing one of my favorite artists, Hawksley Workman perform. It was a rush, amplified by the small venue size and cluster of Canadians (despite London location). Sometimes you just have to say, "screw the budget, let's fly to England to see one of our favorite musicians". Life is short, after all.

--Having my choice in medicine reaffirmed by seeing a woman with Parkinson's discuss deep-brain stimulation therapy. A big rescue lecture for me when I felt like I was drowning in self-doubt and frustration at deciding to come to medical school.

--Getting to perform my first surgical assist! Ok that was a big one so it deserved a bigger font. And thus my choice in medicine was reaffirmed this summer again and again. I completely lucked out this summer, getting to work with some of my favorite nurses and docs one last time. It is such a joy to actually look forward to going to work. 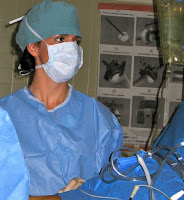 --The other big one, catching my first baby! I know it is cliché to be all wide-eyed and full of enthusiasm as a medical student, but wow those were some hair raising moments of wonder. I know that with time all these firsts will fuse into the routine of day to day practice, so I am going to try very hard to remember and embrace some of the magic that practicing medicine can hold.

--Moving into a lovely apartment with my lovely Manfriend, Tobie.  So moving in together was a major event, especially since we hadn't even been dating a year--but the leap of faith for both of us has proven to be a wonderful choice. One of the things that isn't so much an event, but an unfolding, is getting to live with this stellar human and learn more about him and how we function as a unit. That is actually one of the most amazing parts of 2010. [Warning: sap alert.] Tobie is such a quality man and partner that every night (except the ones when I am fraught with pre-exam thoughts) before I fall asleep I give thanks for this relationship and all that it has brought me. It's true. I am so lucky in love. [Sappy portion of post over.]

--Going to a Canadian city I've always wanted to see--Montréal--and getting to eat (among other outta sight meals) my first, real Poutine. The other wonderful part of that trip to Tobie's homeland was spending a spectacular day at Le Nordik spa (I think music comes on with that link so be aware office cubicle readers). If you ever go to Québec you must visit at least those two locations. I will suggest that you do that in the opposite order, however.

--Spending some quality time with my BFF thanks to a last minute flight and aeroplan points.

--Riding in my brothers newly built AC Cobra. I am so *not* a car person but WOW WAS THAT EVER FUN!!!!

Naturally, the year had some low points. In fact, as I read through a lot of the winter/spring posts I see that I was somewhat unhappy (disillusioned? highly stressed? homesick?) for a few months there. I think a big reason for that was the gleam of adventure and starting a new life here had worn off somewhat right around the time when my dear friend and mentor, Nancy, died. What else can I say about this? Losing a loved one is hard, and it is only made harder when you are thousands of miles away from them while it is happening.

Course when I think of that time and those events all the other lowlights sort of pale, but I suppose that all things are relative and other difficult challenges presented themselves throughout the year. I lost more patients this summer in the ED than I am used to---some were stranger, sadder deaths for some reason. Most of them I didn't write about but sometime I will. There was my anatomy spotter debacle,  living in ant infested hospital lodgings, not getting to spend much time with my family this summer, and missing Tobie for our months apart.


But how about not dwelling on the negative? Yes, I'd hate to end on a downer note. Taking stock of the year I see that 2010 was a year where I celebrated births and mourned death. I jumped in cold rivers and hiked on hot mountains trails. I kissed and cried, drank beer, sweated on a weight bench, celebrated and ruminated. Spent a night wearing a plunging neckline and more days than I'd like to remember in sweatpants. Cooked and walked, plucked the mandolin strings, and watched movies on airplanes. In a year, isn't that the most one can hope for? I'd say so.

P.S Next January I promise not to do a Year in Review post!
Posted by Albinoblackbear at 07:37

That is a seriously hot car!

I was hesitant to post it because the last time I blogged about the car (when he was building it) I got dozens of hits a day from people searching "ac cobra".

Bizarre cult of car building nerds to which my bro belongs! (It's basically Lego for grown men as far as I can tell...only Lego can't go from 0 to 100 in 10 sec).

FWIW, I did not find your year in review boring. And I have been following your blog pretty regularly throughout the year.