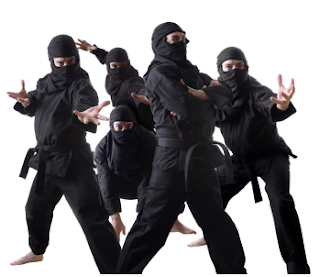 My old roommate, Scott, and I used to have this secret hand gesture that we'd use at parties, called "the tap". If one of us was embroiled in a conversation that was giving us a rash we'd lightly tap on the underside of a table, beer can, ashtray, anything we could find. In our perfect, imaginary world you were actually tapping a small, invisible button that would do one of two things: either open a slide chute below that you could escape through, or activate a team of ninjas that would break through the windows, tumbling in, swinging on black rope.

The ninjas would surround you and then whisk you out of the room in a flurry of ninja-like moves. Either way you were freed from the shackles of painful small talk, irritating diatribes, drunken blathering, whathaveyou.

The other day I found myself reflexively tap...tap...tapping to no avail. The conversation went like this with a young fellow medical student...

Med Student: Why on earth would you go into medicine if you were a nurse? I mean, you already had a career, and a paycheck?

Me: Well, just because you are getting paid to do something doesn't mean you should keep doing that thing forever, right? Other things are required to feel fulfilled and happy in your career and life.  I was--

MS [cuts me off]: I mean I had no burning desire to do medicine, I just picked it based on a process of elimination, seemed like it'd be alright. But if I'd been a nurse already I'd never bother going into medicine!

This is the part where I had a flashback to all the money, blood, sweat, tears, and time that it took me to get into medical school. Then a quick roll call of some of the Canadians in my class who could say the same. Followed by all the people I know who are still trying to get into medicine.

Me: Er...[not really sure where to start]

MS: Did you do it because you could make more money as a doctor?

MS: But you'll make tons of money once you're a doctor so it isn't really a big deal. 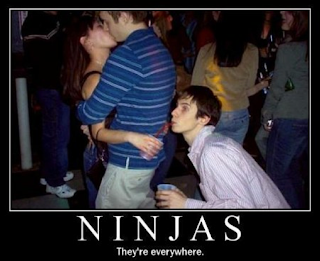 Email ThisBlogThis!Share to TwitterShare to FacebookShare to Pinterest
Labels: 3rd Year, Are You Kidding Me?, YIKES

hilarious, but so true all too often.

In a comment more about the med student you were talking to than finding ways to escape awkward situations (the ninjas would be amazing through), why did said med student even go into medicine if she wasn't passionate about it!?!?! Statements like that frustrate me immensely.

I feel your pain, ABB! Sounds like a variation of conversations I've had in the past couple of years.

My more uncomfortable ones tend to be with nurses, though in which I have to validate my choice without sounding like I'm bagging on nursing.

Oh, and those guys who just fell into medicine because it seemed like a thing that might okay? eff them in the ay.

@EMT--Oh, yah! Aside from the fact that she was completely MISSING THE POINT of what I was trying to get at, I really have a hard time grasping medicine as a choice by exclusion!!!!

Though I am willing to accept that there are people who choose it for a 'job' and nothing else, I find that a little heartbreaking...knowing many people who are trying so hard to get in (and often being unsuccessful).

AB--Yep, I've had the same problems too, especially because nursing was so good to me in many ways!

That sounds like an incredibly painful conversation. That person should NOT be in medicine!

@Allison--oh it was sooo painful...and that was the truncated version! :)