-Toronto Notes, 2011. Yes. All 1400 pages. I think it's officially in the lead as most expensive (135 Euro) and heaviest textbook of my collection. Yet it is light compared to the weight of worry which is post graduate training....dun....dun....dunnnnnn. It is basically the study guide for our Canadian boards, known as the "EE"'s because there are too many letters ahead of that, so even the acronym gets shortened.

I've held off until now because I thought it was a bit much in every sense of the word.  But, I've realised that if I don't get 99% on the EE's I'll either be staying in Ireland to train or working as an RN in Canada, with M.D. after my name. And almost half a mil of debt. Sub-awesome. So the Toronto Notes are now becoming my new BFF.

It's true though. The fourth years in my program have just found out their Canadian interview offers and two (of 13 Canadians applying to get back) didn't even get an interview. Nada. The shopping spree continues...

I also bought the kindle version of First Aid Cases for Step 2. Mostly just as a way to structure some of my studying using cases instead of just reams of multiple choice questions. Which brings me to my next purchase...

Access to the Canadian MCCEE's Question bank for the next 9 months. 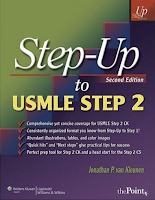 And then I accidentally bought USMLE Secrets For Step 1 for my ipad kindle. Yeah. I already have written step one. I meant to buy step 2. [Hits head on self-assembled desk.]

After reading dozens of reviews on step 2 study guides I opted for Step Up to Step 2.  It will also be arriving shortly via the postman.

Then I bought some pens. You know the ones. Because there is a lot of writing looming on the horizon, and that writing is going to be done nicely in blue-black 0.3mm point style, dammit. We have the technology, people. 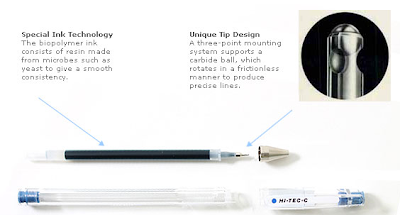 It's only a short matter of time until I also cave on a USMLE q-bank but I just can't decide on USMLE-World or Kaplan. Kaplan is cheaper (wow, I can't believe I just typed that phrase!) but everyone seems to say U-World is tougher and prepares you better. In the same way getting hit repeatedly with a hammer makes getting hit with a hockey stick almost seem gentle.

I need to give my visa some time to stop shaking before I use it again. It was an expensive day. I am not even allowing myself a mental tally at this stage.

As always, any thoughts, experiences, frustrations, or treasured methods of study for the EE's or step 2 welcome.

And so, round two of studying for a life-and-career-path-altering exam begins!! Ding! Ding!

Ah nertz, I wish you had told me first - I have a PDF of the 2011 Toronto Notes I could have sent.

If I come across any other LMCC study prep I'll send'r your way.

The with a little internet savy, you can find Kaplan's Q bank for free on the internet as well

IANH--That's alright, I have it on PDF as well but I wanted a hard copy to make notes in (or use as a door jamb / weapon / shield when the revolution comes).

ABB, sorry to hear you're being forced into pretty huge investments, but thanks for making me feel better about my debt situation ;)

In a couple of years I might asking to buy you books from you so I can come across the pond, too!

I think you're allowed to return any Kindle purchase, for any reason, so look into that for the Step 1 thing :).

Also, I've got U-World for Step 2 - I like it, but it's a little low on number of questions for Surgery and Psych, so far. I haven't seen Kaplan, though, so I can't compare.

Good luck, and thanks! Reading about you getting started on this stuff is so encouraging - I've been putting it off, but now I think I can sum up the courage to face this next (awful) step of med school.

i'm currently using uworld for step 1. every time i get a question right (few and far between...) i want to throw a miniature party. that being said, i do learn a new fact for each one i get wrong..

MD2B--Good to know! Thanks for the info. :) Glad to know my whining has resulted in motivation for one of us! hahah

Rick--Heh. That is exactly how I felt with Kaplan for step 1. I fear the uworld. :D