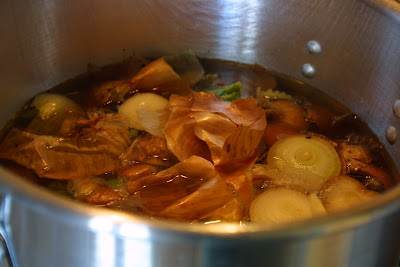 The first matter of business was the stock for the gravy. One of the chefs staying with me roasted the giblets and two packages of wings as soon as we got up Saturday morning. Then the great pot of onions, garlic, celery, carrots, roasted meat, and wine simmered for hours. By 1100h the house already smelled like my mothers Thanksgiving dinner. We made a giant batch of stuffing, thanks to my mothers recipe. Simple and delicious. Having never made an all-out turkey dinner before I was definitely scared that things were going to go Pete Tong. Once the birds were stuffed we sent them out in a flock to the various surrogate ovens we had commissioned for the event. Specific instructions and fingers crossed we set to work getting the large common room ready.

One of my classmates taking a bird to her residence. 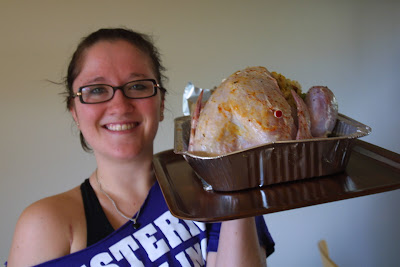 At around 1730h all the turkeys were cooked so we went around collecting them so that the drippings could be used to finish the gravy. Of course one of the people in charge of an oven was no where to be found, wasn't answering the door or his cell phone. We couldn't get a hold of his roommate either so we just hoped that our Village was not about to burn down due to a charbroiled bird. After 1800h we were finally able to get a hold of the final turkey and it was in fine form, not burned in the slightest. The moment of truth though was the carving. By that time there were already over 45 people at our gathering. Wine was flowing, music playing, people snacking. 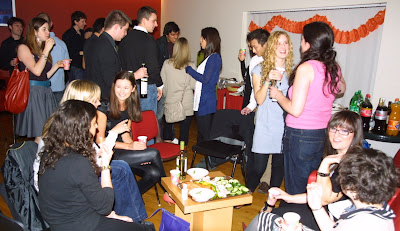 The turkeys turned out absolutely perfect. I was stunned. I had always thought there was some mystical chant or great cooking wisdom involved in making a stuffed turkey. But apparently the only required charm is a phone call home to one's mother. When I closed my eyes I was back in the house I grew up in, sitting at our table with the extra leaf put in...steam on the windows and animated conversation all around. That first bite truly took me back and I thought about the legacy of food that is passed down in families. I made a mental note to learn how to make my mom's pastry next time I am home. I've got the stuffing down now. Baby steps.

The assembly line of carving. 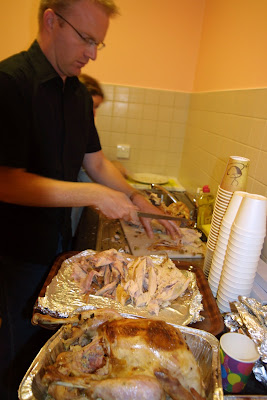 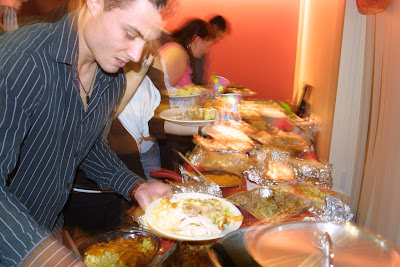 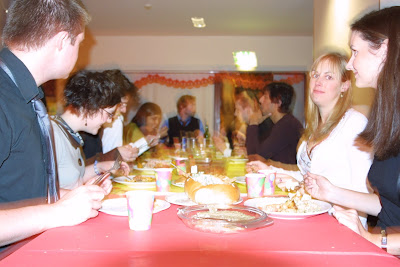 All in all, many of the Canadian guests told me at some point during the evening that they felt a little less homesick due to our replacement celebration. The Irish contingent definitely asked to be invited again next year and seemed impressed at our dedication to eat LOTS of food in the name of, harvest? Pilgrims? Just pass the cranberry sauce.
Posted by Albinoblackbear at 02:41

very good blog congratulations
regard from Reus Catalonia
thank you

DF--Yes. Nothing beats home made stock. That photo was pure food-porn for the foodies out there (like yourself).

BB--haha, yes there actually WAS cranberry sauce, but someone (clearly an Irish guest) put it on the dessert table. So...yeah...we still have some in our fridge. I've been enjoying it with the leftovers. And gravy. Lots of gravy. ;)

There was one Thanksgiving where my wife had the flu, and it fell to my pre-teen daughter and me to prepare the comestibles.

Everything came out fine, despite the fact that we cooked the turkey UPSIDE DOWN.

In fact, it made all the juices go to the breast and, upon reflection, it was a wonderful accident.

W--Aha! That might be a good experiment for next time. :)

OMDG--Yeah, it was awesome. Definitely going to be hard to top that next year!

Nice work EBSCO! Now for the Tofurkey next year when I'm there. LOL!
Send the crew my love. Lets book up another visit.