So I arrived in Ireland on Friday afternoon. The entire journey was pretty uneventful. Seems that 3.5h is almost the perfect amount of time to go through customs, change terminals, check-in, window-shop for 20 mins, buy a coffee and find your gate in Heathrow. Luggage arrived intact (miracle compared to last year) and Tobie was there to greet me at the airport.  A nice change from the complete meltdown that occurred near the police kiosk in the airport last year as I tried to figure out how much of my belongings had been left on the tarmac in Philly after they drove over my suitcases.

This year, instead of having snot and tears all over my face at the arrivals gate I was getting giant hugs and kisses from a very sexy man in a cashmere sweater. Really, you can't top that. I think 2010/11 is going to be a good year.

Arrived to the new pad and was blown away by how much I love it. It has some beautiful views of the river (photos posted soon) to be enjoyed from our plastic (read: indestructible) furniture. Though I must say, this year it is brown instead of lego yellow and red.
Tobie has spent the last week unpacking all of our stuff and making the place look cozy. He folded all of my clothes and stylishly  organized them in the closet (thanks to his training as a clerk in Simons) and even set up all my med books in the office. We had a most lovely dinner of smoked haddock (poached), salad, and potatoes. 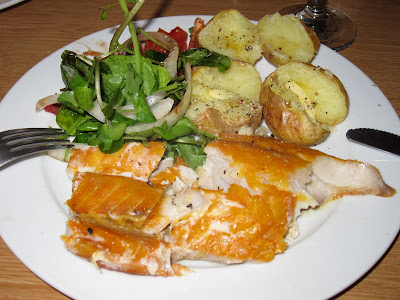 Tobie really is a great cook. All I could think about from the moment that I stepped off the plane was what an incredibly lucky lady I am.
It was during the night that things got weird. I went to bed feeling normal-ish. Well, as normal as one feels after being awake for 30+ hours, flying across the ocean, and moving into a new apartment.
I awoke with a start and all I could think was PAIN!!!!!!!!!
I literally jumped up in a panic PAIN PAIN PAIN PAIN PAIN!! I was still in a sleepy haze but something was seriously wrong. I was trying to talk but all I could say was "this is the worst, this is the worst, this is the worst, this is the worst". I woke Tobie up with all the thrashing and remember him saying "the worst what? what is going on??"
I had this crazy cramp in my left calf muscle. I mean, C-R-A-Z-Y. Now I am no stranger to muscle cramps, I used to get them from years of highland dancing. You know, the ones in the arch of the foot or calf that are so intense you feel like you are going to vomit? This was different.
Took some ibuprofen and tried to calm myself down. Eventually the intensity settled but it seemed to hover on the cusp of sliding back into agonizing pain. I suddenly thought...birth control pill + many hours of sitting in cars and airplanes= oh shit, I have a DVT!

The next day my leg felt really strange. Heavy and aching in a dull way in the calf area. I measured my calves and they seemed to be roughly the same size (within a cm), couldn't feel any heat or see any redness. Did have a HELLA positive Homans sign (yes I know, contentiously significant).  Frustrating being here in Ireland because if it were Canada I know I could have a d-dimer and doppler done within hours and know for sure. Here that would involve hassle and me shelling out a LOT of money.

Today I woke up with the pain/fullness/tightness slightly diminished. Now I am wondering, was that just the calf cramp to beat all calf cramps?? So bad that it actually created muscle PAIN for 2 days afterward? Or is it a DVT and should I be on the next unreliable bus to the A & E department? Gah. Thoughts?

At least I could administer my own SC injections...

Boo. This displeases and uneases me. At least everything else is wonderful!
Posted by Albinoblackbear at 03:41

Email ThisBlogThis!Share to TwitterShare to FacebookShare to Pinterest
Labels: Year 2

I'm so glad to hear that your return to Ireland was uneventful (at least as far as disasters are concerned!!) and that you're reunited with your love! =D

I'm not, however, so glad to hear about your leg. Really wishing I had some solid advice to offer... The best I can do is hope that everything returns to normal swiftly and that such an experience should never be repeated!

P.S. The word verification is "vaderess," which I first read as "vaderness." Both, however, are wonderful...even though I've never seen Star Wars.

I'm not going to say it's NOT a DVT, but I can say from personal experience that yes, it is possible to have a muscle cramp so bad that it causes soreness for days later. It you feel SOB or have leg swelling / heaviness go to the ER IMMEDIATELY.

And I have to say, OF COURSE your bags were lost in Philly. It's possibly the crappiest airport I've ever been to. Thank goodness it didn't happen again this year.

Glad you're back with Tobie!

Scary. Please keep an eye on the leg. DVT's are what keep doctors and nurses up at night, even if they're not ours.

Holy crap! If your leg doesn't feel better, yell and scream your way to an ER if you must! I enjoy your blog too much for a little DVT to get in my way!

But glad you're back with Tobie after a relatively uneventful journey. And your dinner looks delicious. Makes me want to have second dinner.

Glad you made it back safe. Too bad about the disconcerting leg pain. Are you sure a d-dimer is out of the question? It would provide some excellent piece of mind!

Good luck with the new year and I hope the leg pain resolves uneventfully!

Poor ABB, you *almost* made it sans stressors (I was cringing waiting to hear what happened to your luggage this time).

Just keep an eye on the leg. You know what to look for. You probably just had the Charlie Horse from Hell.

And your new home sounds lovely have fun!:)

The leg pain is scary. I hope everything works out okay.

Your dinner, on the other hand, looked delicious. It's hard to find a guy who cooks well, let alone will feed you produce!

could u be a little on the dehydrated side? Sometimes travel will do that to you....try topping up with some electrolyte soln and see what it does.... my husband gets those...at night usually...and really bad....he said it was a worse pain than when his fingernails were ripped off... and with him it is always dehydration.

Oh and FINALLY SOMEONE ELSE WHO HASN'T SEEN STAR WARS!!!!!!!

OMDG--Good to know that it *is* possible to have THAT bad of a cramp. I cited your comment/Cartoon's today as evidence it is NOT a DVT.

Heheh, yeah the Philly flight attendants had some SERIOUS attitude. It was hilarious actually. At one point the woman practically said she'd turn the plane around if anyone stood up before the seatbelt sign was turned off! hahahaha

Maha---Heheh, thanks! I told Tobie what demarcation looks like and said not to bother calling EMS if I stopped breathing. :-) Fret not, you will be able to continue to read about my now-very-boring life. :)

Ninja--Thanks! Yeah, it was actually the BEST luggage adventure in a long time. Karmically, I was due I guess. Having ER experience can be a blessing and a curse at the same time.

RH--Thank you--yeah I would have liked to have known my d-dimer but with no car and having to pay up front I wasn't going to seek med attention unless I thought my leg was about to fall off.

Greene--Indeed! He not only appreciates the veg food group but even knows how to cook them! (He is the whole package that one!)

Cartoon--I posted regarding your comment which made COMPLETE sense. Thank you for that.